The selection, approved unanimously by the Board’s Executive Committee, is effective August 15, 2016. The search was conducted by a committee chaired by Trustee Judah Gribetz and included trustees, faculty, students, an alumnus, a member of the law school advisory board and a CUNY college president. Bilek succeeds Dean Michelle Anderson who served with great distinction for a decade and was recently named to lead Brooklyn College as its next president. 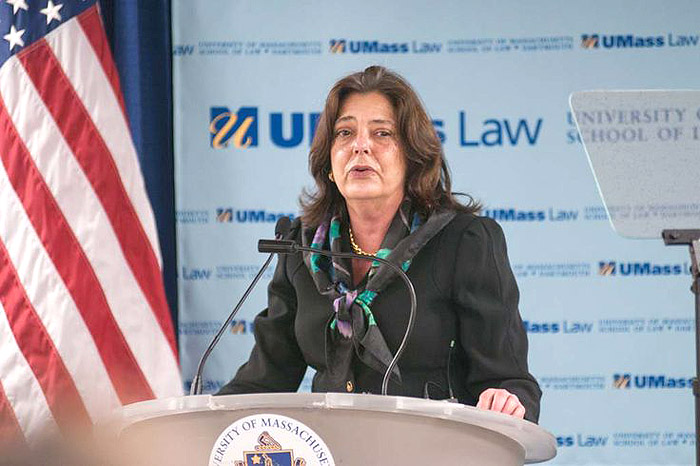 Chancellor James B. Milliken described Dean Bilek as “an exceptional leader with three decades of exemplary experience and service, including overseeing the development of CUNY Law’s innovative curriculum and its accreditation by the appropriate national agencies. Together with her academic experience and recent role as a public law school dean in Massachusetts, she is uniquely suited to further elevate the only public law school in New York City.”

During her time at University of Massachusetts School of Law, Dean Bilek was credited with maintaining enrollments while increasing academic standards and expanding outreach to create a more diverse student population.

CUNY Law is the premier public interest law school in the country and pioneered the model of integrating a lawyering curriculum with traditional doctrinal study. The school has been praised in a study by the Carnegie Foundation for the Advancement of Teaching, “Educating Lawyers: Preparation for the Profession of Law,” for being one of the few law schools in the country to prepare students for practice through instruction in theory, skills and ethics.

Founded in 1983, the CUNY School of Law consistently ranks among the top 10 law schools in the country in clinical training. With a student-faculty ratio of 10 to 1, CUNY Law has been a model for other law schools for its clinical practice. All third-year students at CUNY Law represent clients under the supervision of attorneys at one of the largest law firms in Queens, Main Street Legal Services Inc., situated right on the Law School campus.

According to the National Association for Law Placement Directory, CUNY Law sends a higher share of its students into public interest and public service law practice — 70 percent (class of 2008) — than any other law school in the nation.

CUNY School of Law enrolls an unusually diverse student body. The Princeton Review ranks CUNY Law as having the fourth most diverse law faculty in the nation. It has also ranked the School as the most welcoming law school in the nation to older students.

Under Dean Bilek’s leadership, applications to UMass Law have increased more than 150 percent while applications nationally declined nearly 20 percent. Since 2012, UMass Law has enjoyed steady enrollment with a significant increase in academic credentials and an increase from 24 percent to 34 percent of students of color in the entering class. UMass Law has adopted a requirement of clinic or internship for all law students and added a third semester required Community Legal Research Project Course. In the fall of 2012, UMass Law launched the Justice Bridge Legal Center, a law incubator supporting graduates in solo practice serving modest means clients. Justice Bridge has 10 attorneys, offices in Boston and New Bedford, 30 mentors and over two dozen community partners.

Dean Bilek served regularly as an ABA Site Visit Team member and chair, served on the ABA Special Committee on the Professional Education Continuum, and chaired the Section on Legal Education Diversity Committee from 2010-2011. She presents regularly on issues related to the future of legal education, diversity in legal education, the bar examination, access to justice, legal incubators, and law pipeline programs.