Anthology Film Archives, Film Forum, Film at Lincoln Center, Light Industry, Metrograph, MoMA, and Museum of the Moving Image, in an unprecedented collaboration, are taking part in a centenary celebration of film programmer, author and co-founder of NYFF, Amos Vogel.

Film at Lincoln Center is kicking off the collaboration in the Spotlight section of the 59th New York Film Festival. 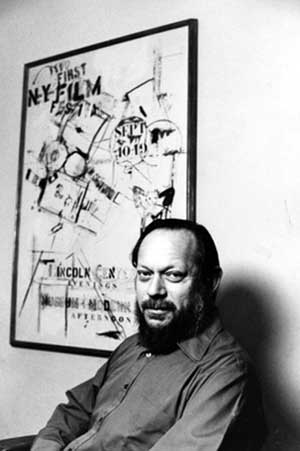 Beginning at the New York Film Festival, and then continuing to unfurl from venue to venue across the season, this wide-ranging program will highlight numerous episodes from Vogel’s curatorial career, such as his years running Cinema 16, America’s most influential film society; his foundational work at Lincoln Center; his time as film consultant for Grove Press; and his classic study Film as a Subversive Art, which will soon be reissued by Film Desk Books. The film culture which presently flourishes in New York exists, in many ways, because of Amos Vogel, who offered the city “films you cannot see elsewhere,” and an uncompromising commitment to the medium’s radical possibilities.

“American film culture owes Amos Vogel everything,” Dennis Lim, Director of Programming for FLC and NYFF was quoted as saying in an July 13 announcement. “His lifelong mission—to expose the widest possible audience to the widest possible range of interesting, eye-opening movies—remains a guiding light for film programmers the world over.

Today, more than ever, there is much to learn from his passion, his eclecticism, his subversive and combative spirit. We are proud to kick off this citywide centenary tribute to Amos at this year’s New York Film Festival and to come together with our colleagues to highlight and honor his immense and enduring legacy.”

The New York Film Festival highlights the best in world cinema and takes place September 24 – October 10, 2021. An annual bellwether of the state of cinema that has shaped film culture since 1963, the festival continues a long-standing tradition of introducing audiences to bold and remarkable works from celebrated filmmakers as well as fresh new talent.

NYFF59 will feature a combination of virtual, in-person, and outdoor screenings, with a comprehensive series of health and safety policies in coordination with state, city, and medical experts. Visit filmlinc.org for more information.

NYFF59 tickets will go on sale to the general public on Tuesday, September 7 at noon ET, with early access opportunities for FLC members prior to this date. Details about ticket prices and passes to follow. Support of the New York Film Festival benefits Film at Lincoln Center in its nonprofit mission to support the art and craft of cinema. NYFF59 press and industry accreditation will open Friday, July 16—visit filmlinc.org for more information.

Film at Lincoln Center is dedicated to supporting the art and elevating the craft of cinema and enriching film culture.

Film at Lincoln Center fulfills its mission through the programming of festivals, series, retrospectives, and new releases; the publication of Film Comment; the presentation of podcasts, talks, and special events; and the creation and implementation of Artist Initiatives. Since its founding in 1969, this nonprofit organization has brought the celebration of American and international film to the world-renowned Lincoln Center arts complex, making the discussion and appreciation of cinema accessible to a broad audience and ensuring that it remains an essential art form for years to come.

← TAILGATE
“The sort of film that’s so densely drenched in dread that it leaves you jumping, barking, screaming along with the characters and begging for some level of respite that you just know will likely never come.” – IMDb
Second Wave of Cinematic News for the New York Asian Film Festival, Running August 6 to August 22, 2021 →