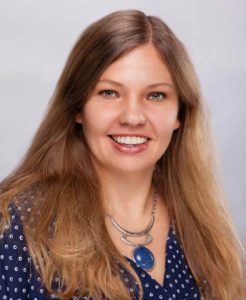 Maria Demeshkina Peek [responding to a question about what else they were doing]: … we are presently working on creating educational modules for schools that would be five minute videos that explain the story of a survivor from different perspectives. We want to hit every demographic known to man so that the kids can identify with a person on the screen.

They don’t really want to listen to a lecture from a special agent. They don’t want to look at PowerPoint presentation. But they do like to see videos and then discuss them. So that’s what we are doing. We created first three modules and we are creating about seven more at least, and hoping to get it in schools first. We’re going to start with one area of the country and then hope to expand.

Stephen Peek: Yeah, Gregg. Usually we finish a film and then we kind of move on to the next one because our kids are very much in the target demographic of kids that are getting tricked online all the time. It’s just been very personal and important for us.

And so when folks on the front lines that are going and doing school presentations, they were saying, “Look, there’s nothing like this for middle school and high school kids, preteens and teens. Would you consider working on some educational curriculum that we could use to help show them how it’s happening?” So we’re very focused on that right now. Before we can move on to the next project, we have to try to make a bigger dent in this problem.

So one of the questions I wanted to ask is, just assuming that you’ve been interviewed a lot and I was just wondering if there was something maybe that didn’t come up in the interviews that you had that you wish had been emphasized more or least brought up in the conversation? So that’s what I’m asking. 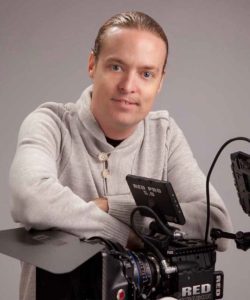 Maria Demeshkina Peek: We just finished the 20 City Limited theatrical tours as we said before. And it is just been overwhelming when the theaters struggle across the country and people struggle to come to films, to see hundreds of people at every single screening.

Also, we’ve been blown away by the support, as you said, by governmental agencies. We did not expect to be such a big support of law enforcement. Everywhere we go, police departments are asking us to bring the film in every single city. We are getting multiple requests. It’s absurd how many requests we are getting right now. And then also, the schools, police departments, local ICAC task forces, which is internet crimes against children task forces. We have several across the country.

Everybody is wanting us to come. Homeland Security is very supportive of the film. Even the agencies that compete in real life like HSI and FBI, they’re all supporting in the film across the board because nobody wants kids to be victimized and everybody wants this problem to go away.

WORD Gregg Morris: Okay. I’m trying to pick up on your expression, “Everyone wants us to go away.” So I mean, we are talking about millions and millions and millions. So how long do you think … I don’t think it’s ever going to go away. But, well, I could be wrong. But it obviously can be diminished in some way to evaluate that. So you think that might happen in the next, say, two or three years?

Some kind of graph or something? Something that tells you that … Well, you know that what you’re doing is kind accomplishing something and it will accomplish something. So how long do you think it would be before you can sort of kick back a little bit and focus on something else?

Stephen Peek: That’s an awesome question, Gregg. Yeah, it’s funny. One of the favorite things about what we do making documentaries is we get to come into a space that we don’t know much about at all. And in a certain small period of time of a couple of years, maybe we kind of feel like we’re kind of mini experts on the subject.

And so the folks that are working in these agencies and in law enforcement and at the National Center, they’ve been doing this, they’ve been fighting this good fight for a really long time. But they are also overwhelmed. And so if we can bring something new to this fight, for us, it’s the power of storytelling. Right? And the power of the documentary film because, I say it all the time, but docs are empathy machines.

But if you spend an hour and a half watching a dramatic arc and personal stories of people that have been affected by it and also seeing the emotion of those that are trying to keep our kids safe online and that are fighting every day on the front lines and how hard it is for them, it helps you to appreciate it in a very different way. And so we’re kind of committed to this fight until we see some change happening.

We liken it often to when we get ready to put our teenagers hand on the car keys. We have this huge process that they have to go through. They have to take a task to learn the rules of the road. They have to drive with an adult here in the US for an entire year before they can drive a car on their own.

But then often, as parents, we’ll give our preteen or our 10 year old an iPad or an iPhone and we’re essentially putting them on an information super highway, but we don’t tell them anything. We give them no training. And so often our kids know the technology better than we do.

And so a big takeaway that we hope this film will do is to help parents to see handing a device to their child as the same thing as handing car keys to their teenager. And to have that much thought behind it and that much training and education behind it before we put them on the internet. And if we can change that and let that become a part of the conversation, I feel like we may can actually see some real change happen.

WORD Gregg Morris: Wow. Let me just …. that Jekyll and Hyde picture on your production notes, how did that come about? I mean, it’s incredibly scary. But it’s scary in a way that says, “You absolutely have to read this. You absolutely have to see this,” instead of scary where I want to run away and I never want to see that image again. So …

Filmmaker Maria Demeshkina Peek: I kind of came up with a concept and then our graphic designers implemented it in a brilliant way. But it’s just that it kind of communicates the essence of the crime. And because so many people don’t know what this crime is about, we kind of wanted to illustrate it in a very simple way that people can understand, look at it and see. That’s exactly what it is. It’s Jekyll and Hyde behavior online. And the crime is called sextortion. You’re extorting people for images. So we wanted it to be a simple understanding of what the movie’s about, and that’s kind of how we arrived to that.

Filmmaker Maria Demeshkina Peek: Because actually, the tactics are pretty much the same. The pattern is the same. The tactics are the same. Pretend to be somebody else. Pretend to be a friend. Ask for images. Flip and start extorting for more. More money or more images. You can explain the crime in five steps. So we really hope that the general public, after watching this film, can also explain this crime in five steps so the kids know what to expect and not fall victim to this crime.

← Part 2, Review and Q&A for SEXTORTION, THE HIDDEN PANDEMIC (2022) – Part 2 of 3
SHADY GROVE Film Review – A Truth, the Whole Truth and Nothing But the Truth Film Review →