I AM is a visually irresistible 26-minute sci-fi short with imagery radiating on an cosmic plain of filmmaking rarely seen for a short film about a close encounter of the extraterrestrial kind. A female techie, Nigerian, living the life of a recluse in a remote German forest, inadvertently as she is jogging one evening stumbles upon an android, prostate and comatose, also female – as well as ethnically similar to her from head to toe – and she decides to carry it home. 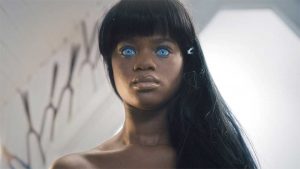 There is a scene late in the mesmerizingly transcendental and hallucinogenic I AM showing the human techie, Noé, played by Heri Hagen, waltzing with Ela, the android, played by Melodie Wakivuamina. Both are incandescently sultry and are dressed in ravishingly silky white gowns.

Director Jerry Hoffmann’s, I AM, with its sheen and cinematic texture, is, visually, a scorching filmic marvel. Check out the trailer that capsulizes in 61 seconds the ethereal cinematography if I AM.

So visually ebullient that enthralled audiences may be unable to avert their eyes for even a few seconds, yet a storyline so ephemerally gauzy and byzantine, it’s as if the filmmakers decided they had achieve a cinematic plain of nirvana, transcendentally sublime, and left it to moviegoers to decide for themselves what the plot is about and what it means to them.

Who Makes a Short Film So Visually Ebullient That Enthralled Audiences Dare to Avert Their Eyes for Even a Moment, Yet, Has a Storyline So Ephemerally Gauzy and Byzantine It’s As If There Is No Plot? Answer: Students completing theses are known to do this.

I AM was written by Florens Huhn, directed by Jerry Hoffmann, photographed by Lena Katharina Krause and produced by Stella Flicker and is the second project by this German collective. I AM is Stella’s graduate thesis. Florens Huhn writes to circle around topics of power structures and identity, according to publicity info for this film. And then, of course, there is Lena Katharina Krause’s dazzling camera work, evocative and bold.

Their first short was “MALL,” a father shopping in a department store with his three sons must decide how do deal with his quiet middle son who is caught stealing a mermaid doll. Click here for more info.

From Film Publicity: “I AM questions the public discourse on robot ethics and raises questions for which there are no answers (yet),” that this African female led drama premiered at Cinequest Film Festival and has been nominated for a Student Academy Award. More from Film Publicity: Stella Flicker is an Austrian film producer living in Germany. She wants to create a realistic, contemporary representation of a diverse society, sans outdated clichés and stereotypes. Also, she wants her work to uncover political and social disparities and inequalities and introduce them to a wider audience.

Director Jerry Hoffmann is also an actor of German and Ghanaian roots. He debuted as one of the leads in the SHAHADA (2010), which premiered in the competition at the 60th Berlin International Film Festival: The fates of three German-born Muslims in Berlin collide as they struggle to find their place between faith and modern life in contemporary western society, caught at a crossroads where alluring liberated lifestyles conflict with deeply-rooted traditions.

Hoffman studied Directing at the Loyola Marymount University in Los Angeles and the Hamburg Media School. I AM also is his thesis movie, according to film publicity.