Tuition for CUNY students increased by more than 30 percent from 2011 to 2016 John Tarleton, a reporter for the Clarion, the union newspaper of the Professional Staff Congress CUNY, wrote in an article. The legislature passed a bill in June 2011 that allowed the Board of Trustees to increase tuition by $300 per year for the next five years following 2011. This tuition increase came on top of an already imposed tuition hike of $230 at senior colleges and $150 at community colleges that the Board of Trustees imposed in November, 2010. 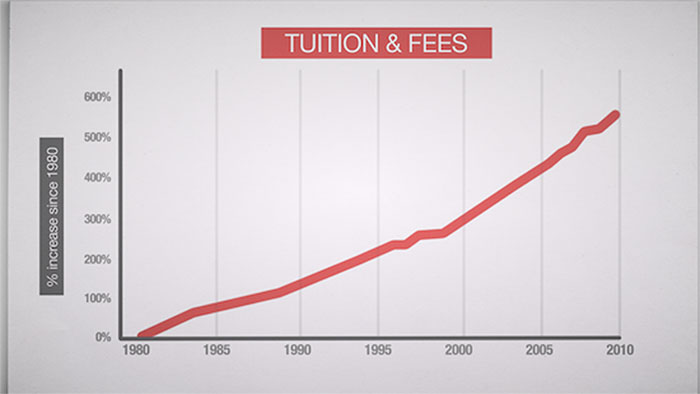 Tuition and student debt are big national issues. PSC First Vice President, Steve London, was quoted in the article by John Tarleton, saying, “Expecting some of the nation’s poorest students to pay more and more will only reduce access to college and expand social inequality – the opposite of CUNY’s mission.” His union represents 25,000 CUNY instructors and some staff.

Wearing black fringe denim bell-bottoms, a white silk blouse and stacked heel shoes from Top Shop, Stephanie Loucas, a 20-year-old media studies major, spoke highly of her education despite the increasing tuition. “Money’s money and everything’s expensive but it really is the best bang for your buck. It’s dirt cheap for its value and in comparison to every other damn school,” said Loucas, who lives in Carroll Gardens, Brooklyn, and was expecting to graduate in the spring.

In between drags of a Marlboro light cigarette in front of the Hunter West Building and the no-smoking sign, Loucas reminisced about her one semester at Connecticut’s Quinnipiac University. “I was paying $50,000 a year for what in my mind is the most coddled education,” she said. “In my opinion, I would have walked out $200,000 in debt for less of a well rounded perspective on education, learning, working – being an overall, functioning adult.”

“If all school was free, I would’ve maybe considered an NYU or something in Manhattan but maybe not CUNY. But, being at a CUNY I get all these skills for a fraction of the price,” she said.

Lydia Gjonbalaj, a 22-year-old junior said she liked CUNY. An art history major, her full tuition is covered. “For me tuition has never really been an issue, I guess, since I receive financial aid, I don’t pay much attention to it,” Gjonbalaj said in the lobby of the Hunter West Building.

Gjonbalaj, a native Staten Island resident, said, “CUNY has been good to me, I don’t think I would really change much. I’m aware that there are other students who would say differently but this is me speaking from my experience with CUNY.” Gjonbalaj is in that 44 percent of CUNY students who receive financial aid. “Other students I know in the CUNY system, not just Hunter, are incessantly complaining about a lack of opportunity at CUNY- but for me you have to make your own opportunities and it’s much more rewarding,” she said. 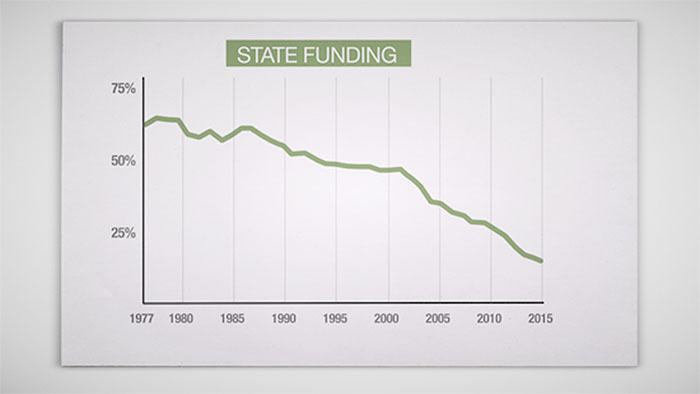 National statistics about the decrease in state aid for higher education.

Ilana Krugolé said she has profited a great deal from attending Hunter. The 21-year-old media studies major, with a concentration in documentary and television production, said, “Most people can go through their four years at Hunter and come out debt free. Even though people complain that the tuition is getting higher every year, you can’t beat the price of a CUNY. You get the same quality of education as any other private college for a much lower price.”

Expressing nostalgia, Krugolé, who lives in Coney Island, said if money wasn’t a factor and she was a senior in high school trying to decide which college to attend, she would have enrolled in NYU. “This was my dream school but the amount of loans I needed to take to complete an undergraduate degree was astronomical.,” she said. “Due to NYU’s reputation and not knowing much about the quality of education at Hunter, I would have gone to NYU. Knowing what I know now, I would choose Hunter even if money wasn’t factored in. I know that I had the best college experience.”

While sipping a grande blonde roast coffee at the Starbucks on the corner of Lexington Avenue and 63rd Street, Krugolé said, “Sometimes people at Hunter don’t appreciate the way things are here but the grass isn’t always greener on the other side. The faculty here at Hunter is made up of professors who work at other institutions like Columbia, NYU and even Yale.”

She said she believed that “at the end of the day the quality of education is very similar to other great schools.”

Robert Bahnsen was more cynical about the subject of tuition. A 21-year-old architect major in his fourth year at CUNY’s City College, he said: “At first glance I don’t think that I get what I pay for. The services and equipment that are available to me are not up to par. The opportunities are few and far between. I think the fact that there aren’t enough classes for the amount of students is ridiculous.”

“Having to fight to get into a class that you need to graduate is ridiculous,” he said about one of the factors that can delay students graduation. He was referring to the to course reductions that can occur because of budgeting problems. “But then I remember that it’s the most affordable way to get a degree that’s up to caliber needed to succeed in our society,” he said.

If given the opportunity to attend a different school, in a scenario where money wasn’t a factor, the Brooklyn native said, “I could think of a lot of other schools I’d attend. The facilities at CUNY’s are old. The system of professionals is in disarray.” Bahnsen noted that his opinions were influenced by article written by the Observer regarding CUNY Chancellor James Milliken’s rent-free apartment.

“While he’s enjoying his rent-free Upper East Side pad, the university system is slapping students’ hands away when they ask for money to do silly, frivolous things, like go on an academic field trip,” writes Observer reporter

Marie Solis, describing Milliken’s rent-free, Upper East Side, 3,000 square foot apartment that rents at $18,000 per month. It is equipped with four bedrooms, 4 ½ baths, a formal dining room and a terrace.

“The budget is terrible. As a school that has a significant amount of its population juggling work and school, it doesn’t offer itself to us. Studios, computer labs, and workshops close early. It’s run like a business,” Bahnsen lamented interviewed in his modest wood shop overlooking Harlem at City College.

It’s evident that CUNY won’t hestitage lavishing money on administrators. However, this writer questions the distribution of money. CUNY doesn’t seriously invest in faculty, facilities, or resources for the most part. The public sees multi-million dollar donations from wealthy donors each year. Funding seems to go towards renovations and new buildings and programs, certainly not to improve the salaries of professors. And that begs the question: So where exactly is funding from the tuition increases really going?

Anthony Falletta can be reached at Anthony.Falletta19@myhunter.cuny.edu