Micro budget films are often produced by tight-knit teams of film makers that often include a core group of directors, writers, producers, cinematographers, and actors who work across several projects together. They may also be created by first-time filmmakers who have limited resources and/or experience.
– Filmmaking Lifestyle (online). 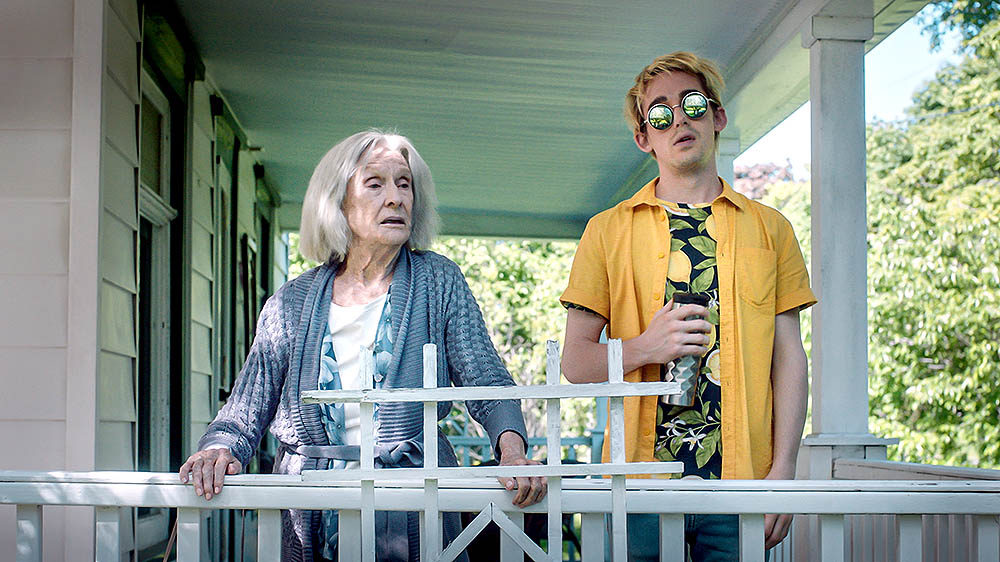 JUMP, DARLING, written and directed by Phil Connell, is a kinetic, melodramatic romp of orgasmic cinematic delights with a sizzling film score, steamy dance scenes, unflinching cinematographic verisimilitude, savvy directing and acting in a family drama movie genre rarely rendered on screen: A family drama with class fused with drag culture. No ho-hum here; it can excite the imaginations of audiences across the film-going spectrum.

Starring Cloris Leachman as Margaret; Thomas Duplessie as Russell, Margaret’s grandson; Linda Kash as Russell’s mother Ene; Jayne Eastwood as Jeanne playing an annoying friend of Margaret’s and real-life drag queen Tynomi Banks playing herself – as well as other standout supporting and character actors and actresses. There are lots more surprises and audiences should be on alert.

Director-Writer Connell drew on personal and family drama experiences resulting in a story with verisimilitude that can pull – is pulling – audiences into screening rooms of all sizes. [See Accolades Below.]  “My grandfather was an alcoholic who died by suicide, and his story loomed large over my life as a sort of cautionary tale,” Connell is quoted as saying in his Director’s Statement about the creative forces at work.

End-of-life care conversations with his grandmother and his own personal life as an artist are infused in the story. There are standout scenes inspired by director-writer’s personal experiences. Such as Cloris Leachman’s Margaret in her home and at the top of the stairs where she is  begging for help to get into the shower; inspired from real-life moments.

Scenes like this will touch audiences’ hearts and souls

Director Phil Connell made a family drama about the irreverence, idiosyncrasies  and charm of American family dramas – and he did it his way. Steeping JUMP, DARLING with drag queen culture: “Family dramas were the films that got me interested in making films, so it seemed like the right place to start.” 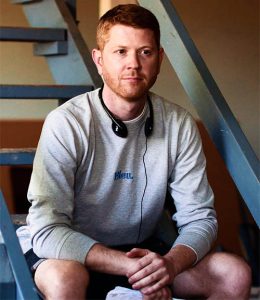 Plenty of bitter sweet angst for audiences to indulge. Russel played by Thomas Duplessie, living in Toronto with a live-in lover who financially supports his acting career, is struggling, swayed in one direction by the expectations of college friends imagining him as the next promising Andrew Garfield type.

Yet, he feels the pull of a powerful inner muse that he is a drag queen artist to his soul. But his live-in lover is contemptuous of drag culture – and Russell, himself, seems to have self doubts. The conflicts churning in his soul cause him to flee Toronto to crash with Leachman’s Margaret.

Yet, she too is struggling, literally losing her mind because she is in the thralls of an unrelenting dementia. She is more afraid of being placed in a nursing home than that light at the end of the tunnel drawing down on her full speed ahead. Yet, she unconditionally accepts Russell – even though he rips her off by forging one of her checks soon after he shows up. Which allows this reviewer to address a fascinating element of the plot: The audience needs to be aware of surprises, such as changing perceptions of what has been impressed upon them as real.

That is, what appears to be real at one time in the course of the movie undergoes change. Not everything is what it appears to be. Russell early on appears to be a manipulative, exploitive grandson ­– and then, violá.

Also, regarding the story, it’s as if everyone, and I mean every angst-ridden character in JUMP, DARLING, has attitude and panache, adding to the juice of  robust story telling with great lines throughout a 90-minute roller coaster ride.

A standout, for example, is Margaret, played by Cloris Leachman, under siege by dementia and more afraid of being placed in a nursing home than that light at the end of the tunnel drawing down on her full speed ahead: She can snap sardonically and hold her own at a given moment.

JUMP, DARLING opens with a bang – Margaret almost blows herself up as she fumbles to ignite a gas stove pilot – and concludes on a higher note than one may imagine. Maybe not so much as a happy ending as it is a salubrious salute to the bitter-sweet vissiccitudes of family life.

“Family dramas tend to be independent fair. What elevates them into the mainstream (or gives them the chance at it) is a powerful matriarchal performance, from someone you know, recognize and cherish. Or maybe that’s just me.” ­– Director-Writer Phil Connell.