A sublime piece of filmmaking about the horrors of traumatic childhood experiences by a filmmaker who, Caveat Emptor, makes sure you feel the pain.

“The family is the most violent institution, group, or setting that a typical citizen is likely to encounter. There are exceptions such as the police or the army in time of War”­ – Dr. Murray A. Strauss, Founder of the Family Research Laboratory at the University of New Hampshire.

This reviewer was fascinated with the way Director Sean Gannet tells his angst laden, bitter sweet, LAST NIGHT IN ROZZIE with its twists and turns in subplots and substories, all meticulously tied together in a kinetically charged narrative about unresolved childhood traumas and horrors that can smolder subconsciously, unconsciously for years – and if not addressed can lay waste to dreams and promises, if they haven’t already.

LAST NIGHT IN ROZZIE opens in the office of successful New York City corporate lawyer Ronnie Russo (Neil Brown Jr.) who gets a phone call from his best childhood friend whom he hasn’t been in touch with for almost 25 years. His friend is dying. Ronnie, in the stages of an important money-making deal, sprints out of his Big Apple office to Boston where they grew up. 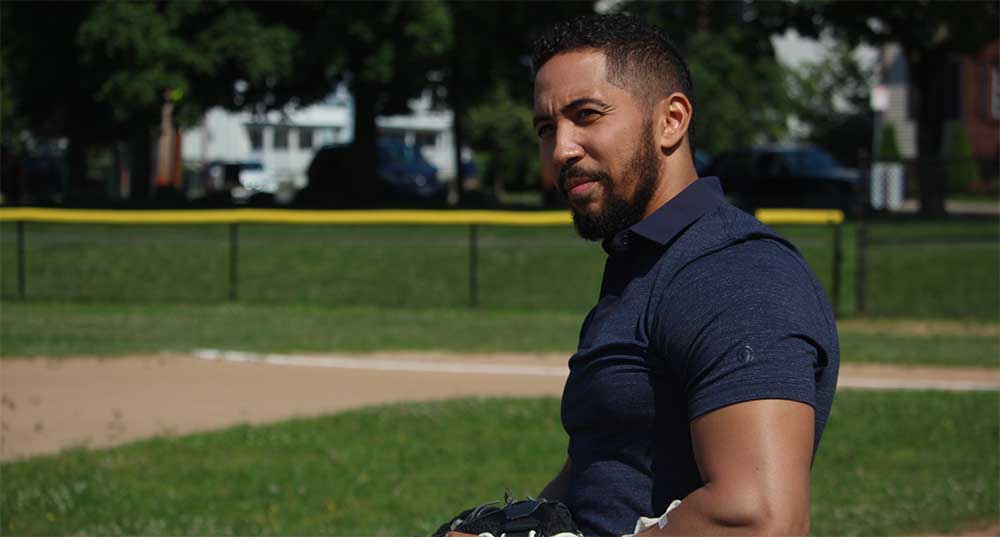 His friend from long ago, Joey Donovan, played by Jeremy Sisto, wants Ronnie to help him with a deathbed wish: To see his son whom he deserted, as well as his wife, 25 years ago. Russo agrees, not realizing at the time that the decision will suck him deep, deep, way down deep, into a emotional vortex that can make the grimmest circle of Dante’s Inferno, Malebolge, look like a cakewalk. 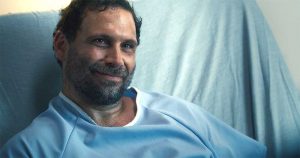 The mission stirs up unresolved horrific childhood issues like an onion being surgically peeled, revealing, one peel at a time, an event or a moment that threatens to unhinge him because it can no longer be suppressed.

Writes Director Sean Gannet in his Director’s Statement: “It’s my hope that the audience feels” the awe and angst Ronnie does when the truth is revealed about what happened that last night he spent in Roslindal. The story telling can sweep audiences away. The production design, Gannet writes, shows Ronnie’s disturbed unconscious mind. The soundtrack is a mirror of Ronnie’s disturbed inner life. Childhood flashbacks show up in the course of the story providing not only thematic context about Ronnie’s and Joey’s childhood years but also hinting about the horrific life changing moment in the denouement of the movie. “We had to treat these moments with the severity they deserve and give our viewers a sense of Ronnie’s anguish,” writes Gannet.

Russo’s relationships with all the people he must meet on his mission are affected by the goings-on in his mind, body and soul. There is the mother, played by Nicky Whelan, of the son Joey is desperate to meet. Is she wrong for not telling her son the whole truth about the dad he can’t remember, that he died in a car accident. There is Ronnie’s mom, played by Maureen Keiller.  Russo is so estranged from her that he can’t even accept her wish to play a simple card game and flees in terror from her home.

THE LAST NIGHT IN ROZZIE started pushing this reviewer’s buttons as soon as Ronnie, to help with the deathbed wish, resorts to telling white lies and half-truths to people whom he encounters as he tries to help his friend. He stumbles and fumbles, and has to backtrack here and step back there. There were times I wanted to reach into the screener and shake the hell out of him and give him a “Man up” whack.

And there were other times I felt that fate unmercifully had thrown a kitchen sink of soul-wrenching existential woes at him.

Jeremy Sisto as Joey Donovan: He stars on CBS as Jubal Valentine in FBI, which debuted as the #1 new series its first year, was the #2 drama in its second season and has returne for its third season this year.  His additional television series credits include starring roles in “Law & Order,” “Suburgatory,” “Ice,” “Wicked City,” “The Returned,” “Kidnapped.” Also, he starred in National Geographic’s television miniseries “The Long Road Home.” He also appeared as his FBI character on a crossover episode with on FBI’s spinoff series, FBI: MOST WANTED.

His feature film credits include the classic “Clueless,” “Break Point,” which he co-wrote and produced, “The Other Side of the Door,” “Hangman,” “Grand Canyon,” “Hideaway,” “Robot And Frank,” “Moonlight And Valentino,” “White Squall,” “Without Limits,” “Suicide Kings,” “Thirteen,” “Wrong Turn” and “Waitress.” Also, Sisto lent his voice to the animated films “Ferdinand,” which was nominated for an Academy Award and Golden Globe Award for Best Motion Picture – Animated, and “Frozen II,” which earned a Golden Globe Award nomination in the same category.

Nicky Whelan as Pattie Barry: Nicky Whelan will be starring opposite Bruce Willis in TRAUMA CENTER. Other recent credits include the indie films LAST NIGHT IN ROZZIE, INSTAFAME, and JOYFUL. She also starred opposite Academy Award winners Nicolas Cage and Faye Dunaway in the thriller INCONCEIVABLE. Nicky also starred on Robert Rodriguez’s FROM DUSK TIL DAWN: THE SERIES, which aired on the El Rey network. She previously starred on Rodriguez’s series MATADOR.

Whelan ‘s other film credits include her lead role in the twisted psychological drama REBIRTH for Netflix, which premiered at the Tribeca Film Festival, and in the comedy horror TRAGEDY GIRLS opposite Josh Hutcherson and Craig Robinson. Her other film credits include the Farrelly brothers’ HALL PASS (Owen Wilson and Jason Sudeikis); THE WEDDING RINGER (opposite Kevin Hart); LEFT BEHIND (opposite Nicholas Cage); and Terrence Malick’s KNIGHT OF CUPS (opposite Christian Bale). Her television credits include HOUSE OF LIES; ENTOURAGE; FRIENDS WITH BENEFITS; WORKAHOLICS; THE LEAGUE; FRANKLIN AND BASH; SATISFACTION, and, notably, as Pepper Steiger on the renowned NEIGHBOURS. She is also currently featured opposite George Clooney in the Nespresso commercials and was voted among Maxim’s Hot 100. Nicky just wrapped the lead role on the independent feature THE MIDDLE OF X and LOVE BY DROWNING. She recently wrapped the female lead in the Hallmark Channel Movie for Television REINDEER GAMES.

Director Sean Gannet: Director of the short film based on the feature script, and has worked closely with writer, Ryan McDonough, during the many phases of development for LAST NIGHT IN ROZZIE. He was raised by a single mother and grew up estranged from his father. LAST NIGHT IN ROZZIE marks his second feature and first feature-length dramatic work.

Sean has been making movies for over 15 years. He cut his teeth in the studio system working with Mike Myers and went on to direct multiple award-winning short films and an independent feature comedy. He has also been producing and consulting for TED Conferences for over a decade. During that time he has learned the value of socially relevant storytelling and is dedicating his artistic career to that direction.

He lives and works in Brooklyn, NEW YORK, where he owns SFG Productions, producing video, events, and virtual experiences.

Ryan McDonough: Writer/Producer. An only child raised by a single mother, Ryan moved around Boston often but grew up mostly on Glendower Road near the Beech Street Projects in Roslindale. He’s enjoyed a 25-year career in entertainment as an actor, host, emcee, writer and personality – most notably as “Cuervo Man“ – a professional party catalyst whose story found great notoriety on “This American Life.“ His feature screenplay, LAST NIGHT IN ROZZIE, is inspired by his time in Roslindale and HE was a Scriptapalooza semifinalist. Ryan wrote, produced and co-starred in the award-winning short film based on the feature script.

Joseph Stephans: Producer. Began his career during New York’s independent film wave of the 90s and has worked on over 30 films along with countless TV shows and commercials. In a variety of environments, ranging from the Virgin Islands to Alaska  whether it is the ultra low budget (Girls Town), the mid budget (Requiem For A Dream) or the colossal budget (The Good Shepherd), Joe has been helping filmmakers achieve their vision for twenty years. He is  the Producer of the critically acclaimed feature WILDLIKE and the
soon to be released feature, THE OUTSIDE STORY, starring Bryan Tyree Henry.

Andrew Cahill: Producer. A Peabody Award-winning editor and producer whose work has been on CNN, ABC, History, A&E, Disney, Time.com, and others. Before Last Night in Rozzie, Andrew produced the independent films,18 to Party by Jeff Roda which premiered at the Woodstock Film Festival in 2019 and was released on November 7, 2020, and Brother by Lisa Ebersole, as well as the short documentary Myrtle Simpson A Life on Ice, which is currently touring the globe as part of the Banff Mountain Film Festival World Tour He also produced the off broadway play, Mother, starring Buck Henry and Holland Taylor and has a new piece by MJ Verruto in the 2021 Edinburgh Fringe Festival.

Jongnic Bontemps: Composer.  Jongnic “JB” Bontemps is a uniquely modern film composer, harmonizing a classical education with his rich tech background as a maestro of Silicon Valley to write everything from the hip-hop infused score for the Tribeca-favorite documentary United Skates, to rousing additional music for Creed II. He’s been the go-to composer for the for the latter film’s director, Steven Caple Jr including the score for the coming of age drama, The Land, where he also produced the song, “This Bitter Land“ for Nas and Erykah Badu.