NO RUNNING Primered Friday, June 11, 8 p.m. Purchased films remain available to stream on demand from above date through June 23 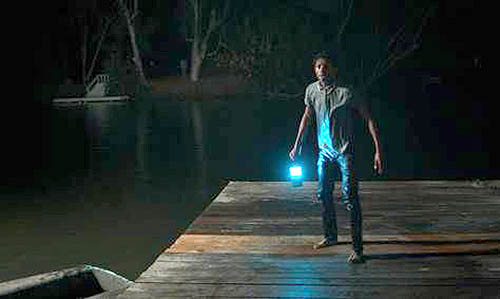 When high school student Jaylen Brown (played by Skylan Brooks) finds himself under suspicion after his classmate’s mysterious disappearance, prejudice quickly begins to bubble up to the surface of his small town. Working quickly to clear his own name, he begins to unravel a massive web of secrets that all point to otherworldly forces at play.

In his debut feature, director Delmar Washington takes the sci-fi trappings of a B-movie and slyly intertwines them with themes of racial injustice and social realism to create a tense U.F.O. abduction thriller for 21st century America.

No Running draws on a quiet energy that serves to deepen the mystery as the film introduces the characters in Jay’s orbit, from his loving mom (Rutina Wesley) and disapproving “aunt” (Taryn Manning) to a conflicted town sheriff (Shane West) and the local outcast with firsthand knowledge of abductions.

First-time screenwriter Tucker Morgan channels the paranoia of being a Black man in America into a tale of desperation and wonder, finding a clear collaborator in Washington’s subversive eye

The B-movie sci-fi trappings and the purported UFO abduction thrills were a meretricious tease. What audiences will actually get are two or three blurry scenes bathed in hokey bluish light accompanied by thunder, lightning, menacing storm clouds and a banal hip-hop melody, all delivered in visually inscrutable and incoherent scenes so blurry that no one should be surprised if they hear or imagine hearing jeers, such as, “Are you kidding me!”

Plus, the UFO abductors that we never see only seem to beam up young women, almost all White.

The metaphorical social commentary addressing America’s racial injustice, intimated by NO RUNNING’s filmmakers, was so clumsy, flimsy and witless it would be easy to understand if audiences – or critics – misinterpreted the film as a sorry attempt at parody about the angst and ails of a Black family – the only Black family – trying to assimilate into a racist White Los Angeles suburb. [I liken that to a person desperate to fly away … and said person jumps off the roof of a skyscraper.]

Prejudice quickly begins to bubble up to the surface of his small town. Bubbling prejudice? Ha! The racism is volcanicly “in yer face.”

With so many Blacks and People of Color being murdered, shot and brutalized by police, NO RUNNING filmmakers missed or decided to pass on an opportunity to tap into the kinetic energy catalyzed and cauterized by #BlackLivesMatter and the revulsion to the torture murder of George Floyd. No mention of #BlackLivesMatter? Not even a mention about the fight for Civil Rights? They decided not to flex some panache and take a stand by cutting loose with indignant Sturm und Drang about the treatment of Blacks and People of Color? Truly befuddling. The filmmakers, according to marketing and publicity accounts, talk the talk about how they managed to escape the horrific realities of life in the inner cities of poor Black America, and they most likely walked the walked, but to say nothing about, not even a hint at, the heroes and saints who risked their lives to fight the great fights let those escapees prevail?

There are loads of films and videos with overtones and undertones and metaphorical themes and plots about all manner of societal evils. They rate from from 5-stars to 1-star duds. NO RUNNING is a 2.5-star so-so piece of work that could have been so much more. 1 star for NO RUNNING’s selection as part of the prestigious 2021 TFF Juneteenth programming – that cannot and should not be denied; 1.5 for the intermittent cinematic flashes of the oodles of talent behind and performing in front of the camera as well as the smart production and stage craft values hinting at the higher creative level the film could have achieved. There were also some good lines.

NO RUNNING as a film waddles and bumbles along when it should have been a sprint and a shoutout.