Director Dave Caplan’s directorial debut is a love letter and inspirational hip hop archive about a master of the art who is more than likely your favorite rapper’s favorite rapper. 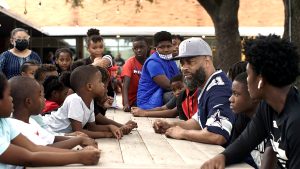 The film chronicles the life of this lyricist and producer who wrote for NWA and Dr. Dre, co-founded Death Row Records, mentored Snoop Dogg, and left his mark on HipHop culture forever. Wow!

Thirty years after a devastating car crash that took his voice, The DOC is still struggling with his legacy as a rapper with the greatest cadence before West Coast rap exploded in popularity and he considers surgery that might be able to restore his vocals. THE DOC explores this risky decision alongside a cast of celebrities who reflect on his impact in their lives and in the world from music, to love, to civil rights crusading.

The film is a time capsule of the passion and purpose behind hip hop music in the 90s, especially within the social and political contexts of LA. Stories of falling in love with Erykah Badu and creating other meaningful relationships with giants in the rap game make for an emotional experience that will comfort both HipHop heads and pop-culture enthusiasts. – Shakira Refos