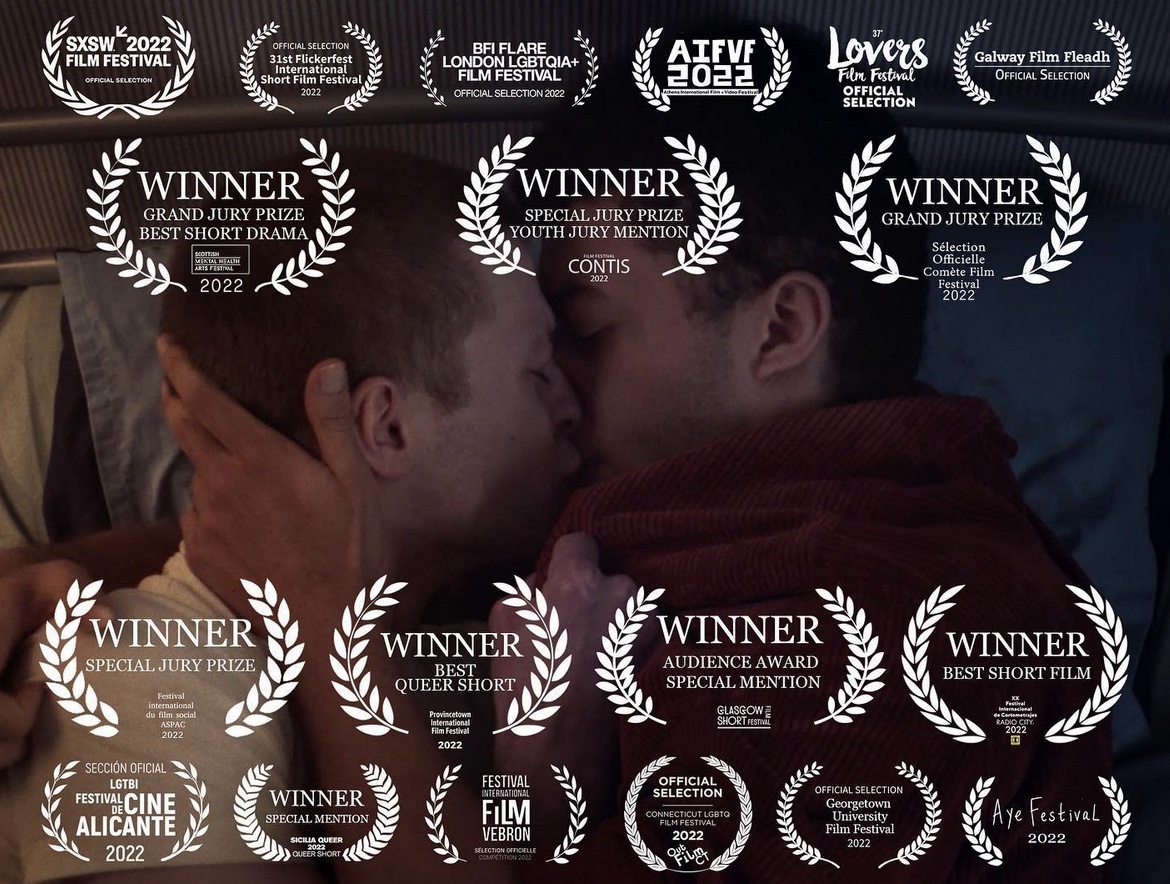 After a night of intoxication, a hungover and hysterical Nick wakes up next to his boyfriend Charlie and must conceal him from his own homophobic and dysfunctional family – was the pitch of various movie publicity and marketing promos.

Cinephiles and film aficionados, however, quickly know there is immeasurably more to this movie than meets the eye, that they will have to see this film short more than once, that it packs a wallop. THUS THIS DISCLAIMER: It won’t hurt if potential audiences see this film with as many friends and acquaintances for the obvious reasons, and it also won’t hurt if they show up, at the ready, with heuristic measures akin to wearing a Psychologically Analytical Thinking Cap (PATC).

PATC could help them deal with the Formidable Repressed Inner Child Syndrome (FRICS). Note, in popular as well as analytical psychology, the inner child is an individual’s childlike aspect, that is, what a person learned as a child before puberty. The inner child is often regarded as a semi-independent, sub-personality subordinate to the waking conscious mind, though there are exceptions when they’ve been naughty and mischievous and can be irritating beyond belief.

Also: TOO ROUGH’s denouement is so quixotic that this reviewer has shied away from trying to describe it out of fear of creating a colossal spoiler for a movie that is marvel of bravura filmmaking.

TOO ROUGH opens with Nick, gay, played by Ruaridh Mollica, partying with friends and his lover, Charlie, played by Joshua Griff, at a Glasgow apartment shindig where they are guzzling the night away. In the course of the evening, Nick and Charlie exchange dares, goad each jocularly about where they’re going to crash after the fun ends.

The boozing and the goading inexplicably lead to the unleashing of Nick’s repressed and seething inner child, setting Nick up for a nuclear family confrontation with his dysfunctional parents in a home where domestic-family violence is de riguer. In fact, Nick’s inner child (unconscious to him) might even be responsible for Nick attending the party and getting hammered.

Nick’s parents are: 1, grossly homophobic (plus, they don’t know that their older son is gay); 2, racist to the core; and, 3, dysfunctional to a T as if they’re on psycho steroids – if they’re not borderline criminally insane. TOO ROUGH’s denouement left this reviewer nearly thunderstruck each time he screened the film – which was screened several times because the reviewer couldn’t get over how Director-Writer Sean Lìonadh and his filmmaking cohorts did what they did. I kid you not.

A Hint at What the Reviewer Thinks the Filmmakers Did

Dramatic tension increases inexorably as the film progresses but one of the “things” they did was to infuse TOO ROUGH with a subliminal strain of dark humor reflected in scenes that this reviewer absolutely didn’t describe because to write about them too closely approaches the no spoiler line. Hint: Some made this reviewer momentarily gasp.

“How did this happen?” Nick says, rhetorically; Charlie is right there beside Nick, in a scene in his bedroom in the tenement apartment where he lives with his parents who are just down the hall from his room as they are going after each other’s throat in a spirited row so loud it sets off other tenants in the building in a kind of symphonic disharmony. This reviewer believes Nick is in neurotic denial, and playing mind games with himself, thus, playing mind games with Charlie, who might be suspicious that Nick is playing mind games.

Why? There are, one, subtle but keen plot elements; two, cinematic MacGuffins and, three, foreshadowing elements wielded inimitably through this marvelous story telling film. Nick knows on some level what he doesn’t want to admit. The toll of Nick’s FRICS is reaching its limits right before our eyes.

The minimalism infused in what looks like every aspect of TOO ROUGH is uncannily creative: Not one frivolous shot nor gesture, wasted word or aural ambient, ranging from the cinematography of urban living in working class Glasgow to the ambient sound of Nick’s parents going after each other’s throat just a few feet from the room Nick and Charlie are sharing, to other tenants growling loudly and raucously about the ruckus being generated by Nick’s parents.

The acting is superb across the board. The film score, sparing but taunt, augments the tension. The voluptuously inspired verisimilitude allows audiences, literally and figuratively, to feel as if they’re flies on the walls in a Glasgow tenement apartment – where the end justifies the means.

TOO ROUGH has been racking up awards and wowing audiences and critics on the 2022 film festival circuits since the beginning of the year, blazing the festival path in 22-plus film festivals thus far, including BFI Flare, SXSW, Torino LGBT Film Festival, and Flickerfest International Short Film Festival. It premiered at the SXSWV & Film Festival in March and HollyShorts Film Festival in LA, that recently ended.

The film has also snared 12 awards including both the Audience Award and the Special Jury Mention at the Glasgow Short Film Festival and became eligible for the shortlist at the 2023 Academy Awards following sits win for Best Queer Short at the Provincetown Film Festival. In July alone the film won Best International Short at Ireland’s Galway Film Fleadh and is set to screen at the Durban International Film Festival in South Africa.

Director Writer Sean Lìonadh is a poet, writer, filmmaker and musician from Glasgow, known for his visual poem TIME FOR LOVE, seen by millions of people online, winning a 2019 Royal Television Society award and was translated into five languages. It also inspired a Ted talk and a movement called the Time for Love Project.

With producers Alfredo Covelli and Ross McKenzie, Sean is developing his first feature film, Nostophobia, a horror relationship drama exploring the terror of adolescent intimacy and trauma through a gay relationship. Sean took part in Berlinale Talents 2020, and BBC Writer’s Room Scottish Voices 2020. He is represented by Emptage Hallett as a writer and performer.

Sean published his first book, a poetry collection called Not Normal Anymore in 2019 with Speculative Books. His poems are studied as part of the English curriculum in international schools. Aside from making, Sean runs poetry workshops with young people, and is keen to work closely with the LGBTQ+ community within schools, community groups and institutions.

← Eighteenth Annual 72 Hour Shoot Filmmaking Top Ten Premiere: Joyful Resistance Winners
A F*ckin’ A, 5-Star Beast of a Movie – Audiences Should Prepare to Be Blown Out of Their F*ckin’ Seats →