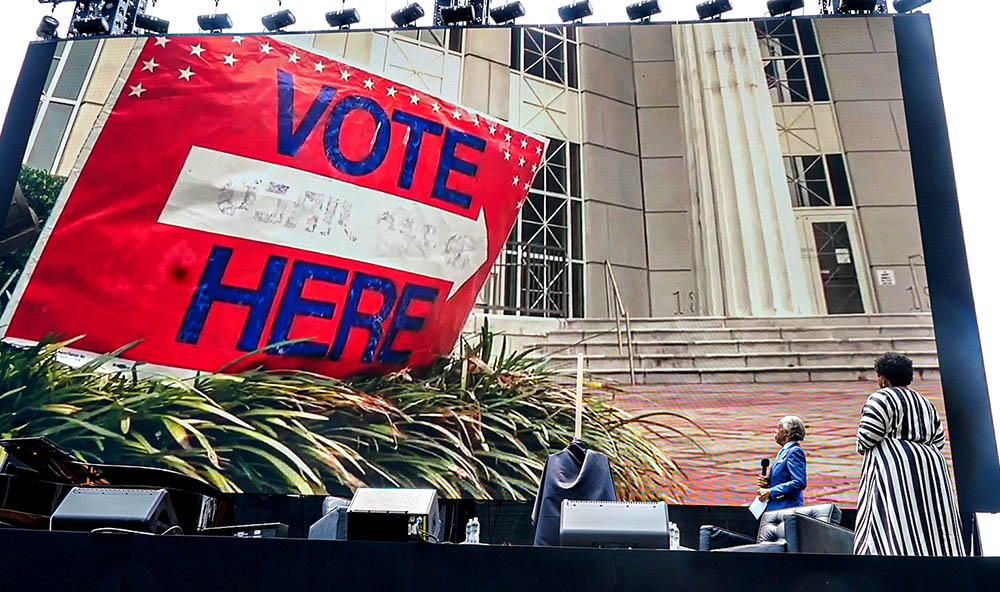 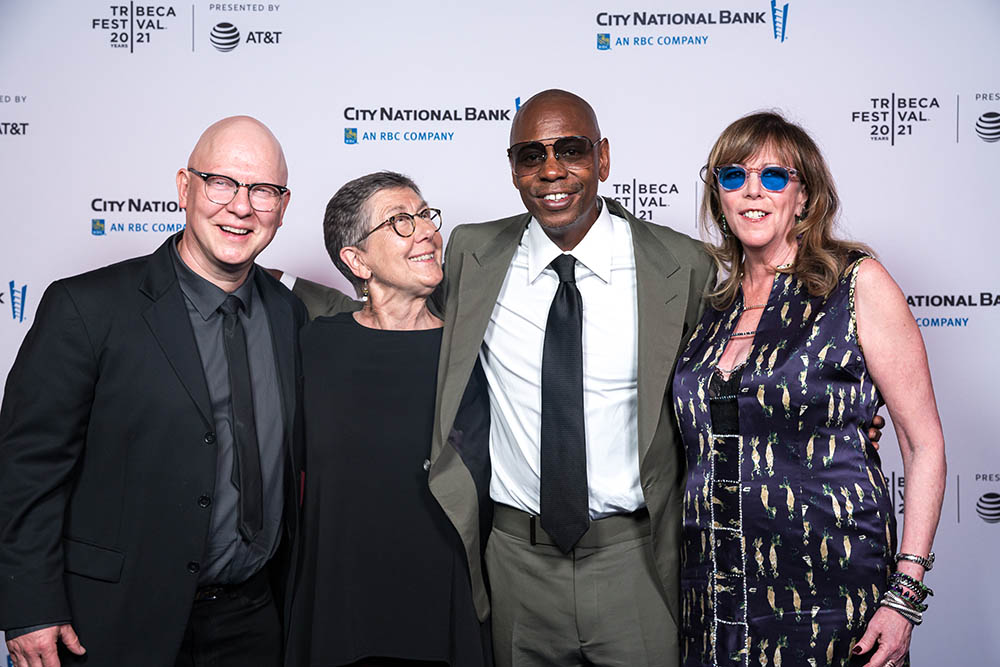 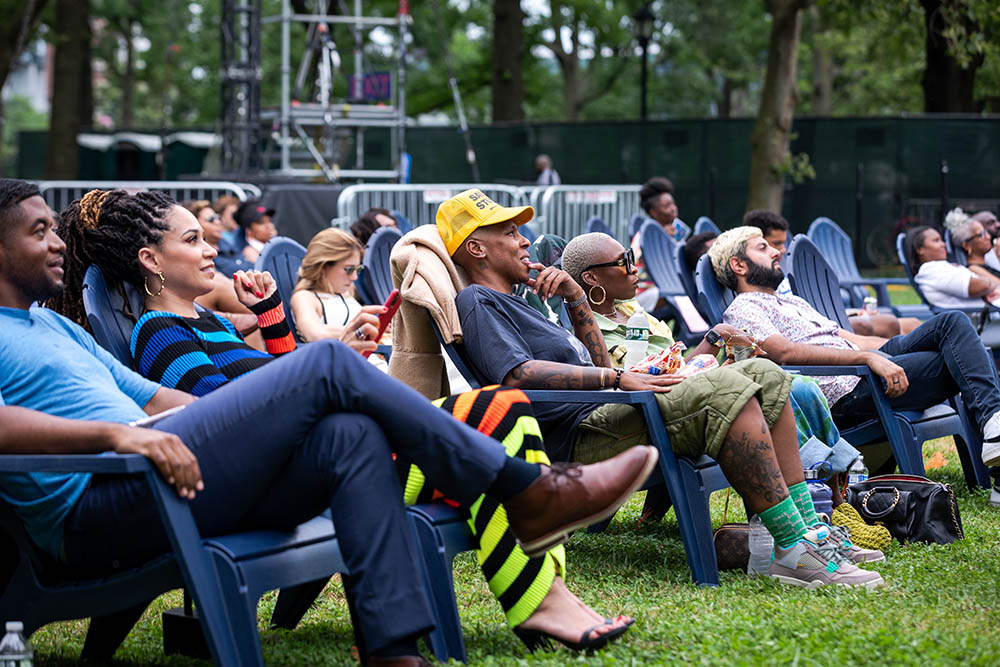 Saturday, June 19: Red carpet premiere, screening, and Q&A for The One and Only Dick Gregory, directed by Andre Gaines, at The Battery for the Tribeca Festival 2021. Picture by Samantha Okazaki

The 20th Tribeca Festival wrapped with some of the fest’s most anticipated events. From Stacey Abrams being honored for the first-ever Belafonte Award, celebrating Juneteenth, Radio City Music Hall’s first post-COVID event – and more. Highlights below:

Fueled by the murder of George Floyd, shut-in by the closures of business and unable to perform around the country, the movie follows Chappelle as he provides the community he calls home with two things desperately needed in difficult times – economic and comic relief.

Tribeca presented the inaugural Harry Belafonte Voices For Social Justice Award, named for the famed performer, actor, activist, and civil rights leader. The Belafonte Award recognizes individuals who have used storytelling and the arts to enact change in their communities. The first-ever recipient is political leader Stacey Abrams; honored for her outstanding leadership, service, and commitment to fighting against injustices through her work as a political leader, voting rights activist, and novelist. The Award was presented to her by Rev. Al Sharpton following a conversation with Abrams moderated by Robin Roberts at The Battery.

Award-Winning Director/Producer/Writer Gina Prince-Bythewood sat down for a conversation with actress and Love & Basketball star, Sanaa Lathan on the roof at Spring Studios as part of the Tribeca Talks Director Series. The conversation centered on the need to tell all stories and equal representation in film/TV. Gina and Sanaa also delved into Gina’s vision for Love & Basketball. Gina said she came up with the story because she was inspired by the film When Harry Met Sally and wanted to create a similar story with a Black cast, and pulled a lot of her vision for the love story from her own personal life.

Gina also discussed the ups and downs of being a director and how important it is to tell your own story and stay authentic to the story you want to tell without letting outside opinions influence your vision as a director/storyteller.

Ahead of the release of 7 Years, an Audible Original Words + Music production from rapper and The Roots frontman Tariq Trotter, the performer and Head of Audible Studios Zola Mashariki come together for an exclusive conversation on the roof at Spring Studios. The two discussed Trotter’s innovative audio production, the evolution of his singular creative voice, the unique joy of Black storytelling, and the integration of song and story to create something truly exceptional for listeners.

For the premiere of the documentary The One and Only Dick Gregory at The Battery, director/writer/producer Andre Gaines, Executive Producer Lena Waithe, and Special Guests were joined on stage to discuss the impact that Dick Gregory’s work had on subsequent generations of artists and activists. The Q&A was moderated by The Grio’s Entertainment Director Cortney Wills.

Kinfolk is an augmented reality app that highlights Black and Brown figures. The viewer can use Kinfolk as a roaming “virtual museum” to bring digital monuments to life through a phone/tablet, hear voice overs from iconic black figures, see generative art emanating from every sculpture and listen to an original afro-futurist jazz composition while walking across various historical sites in NYC. The immersive was created by Idris Brewster, Glenn Cantave, Micah Milner and was part of a special presentation at the Harry Belafonte Award Presentation.

Grammy-winning singer Cécile McLorin Salvant took photos before this afternoon’s Tribeca Talk event at Brookfield Place, a musical storytelling performance where she previewed her wildly original upcoming animated film Ogresse – including some of the film’s songs, accompanied by pianist Sullivan Fortner – and also told personal stories and spoke about her artistic inspirations. The event was part of Tribeca’s Juneteenth programming.

Visual artist JR, named one of TIME Magazine’s 100 Most Influential People in 2018, world premiered his film Paper & Glue this afternoon at Brookfield Place. In the film, which is executive produced by Ron Howard and Brian Grazer, director JR turns the camera on his own work, as he undertakes massive installation efforts, turning some of the most provocative spaces of the world into eye-catching immersive art that challenges perspectives and unites communities. After the film, Tribeca co-founder and CEO Jane Rosenthal moderated a conversation with JR.

The moving film Death Of My Two Fathers is an expansive reflection on family, loss, and the experience of being black in America. Sol Guy, tells the story of his father’s final days through a series of six VHS tapes.  The film was introduced by Tribeca Festival co-founder Jane Rosenthal, and was followed by a Q&A with Sol, his son, and sisters.

Tribeca hosted the North American premiere of the feature film Lorelei directed by Sabrina Doyle. The film follows Wayland (played by Pablo Schreiber), who after serving 15 years in prison, reunites with his high school girlfriend Dolores (Jena Malone). After the film Doyle, Schreiber, Malone were joined onstage with Producer Kevin Chinoy and other members of the cast.

Director/Writer CJ Hunt, executive producer Roy Wood Jr, screenwriter Jane Geisler, producer Darcy McKinnon and the crew of Neutral Ground, brought joy, excitement and passion to Pier 76’s red carpet for the world premiere of their documentary film. After the screening, Hunt and Wood joined Nikole Hannah-Jones for a Q&A on the Lost Cause, Confederate monuments and the necessary change that has been centuries in the making. 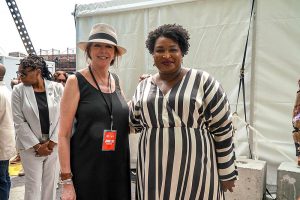 Films from the Juneteenth Shorts: Shining Stars included Magnolia Bloom, Silence, 19 Seventy Free, Cherry Lemonade, Waves, and Enough. The filmteam from Waves owned the red carpet, having a blast, posing, and hyping each other up, and brought all of the energy to Pier 76 on a hot summer day!

The Five Heartbeats premiere took place at Pier 76 where director and actor Robert Townsend appeared on the carpet along with actors Michael Wright and Leon. Other guests at the screening included Hawthorne James, Tico Wells, Harry Lennix, and Harold Nicholas. After the screening Townsend took to the stage with Karen McMullen for the Q&A.

After the screening of David Makes Man, series creator and executive producer Tarell Alvin McCraney and Dee Harris-Lawrence took to the stage with Angelica Jade Bastién for a conversation about the series. The two had an incredible bonding moment on stage during the talk where Tarell and Angelica both found out they were from Richmond Heights in Miami and coincidentally went to the same elementary school! Dee discussed how her writers’ room “is not diverse, it’s inclusive, because it’s only going to shape your story better and more if you have different people coming from different areas, not just where I came from.” Tarell discussed what it means to be a Black man in America saying, “it is in our best interest to see a Black person and know that is a part of who we are. It means that we could come in every size, shape, color under the rainbow.”

Author Francisco Goldman spoke at the Q&A for the premiere of The Art of Political Murder which was based on his book of the same name. Directed by Paul Taylor, the documentary takes place in the aftermath of the Guatemalan Civil War, a vicious conflict between government forces and leftist rebel groups; human rights activist Bishop Juan Gerardi presents a damning report outlining atrocities committed by the army.  Two days later, he is brutally murdered in his garage. The murder sets the stage for a powerful battle between justice and corruption in this political crime thriller.

Yusuf Hawkins: Storm Over Brooklyn, tells the story of Yusuf Hawkins, a black teenager who was murdered in 1989 by a group of young white men in Bensonhurst, Brooklyn. On Saturday, the Film Team including Muta’Ali (director), Jonathan Chinn (executive producer), Jevon Frank and Victorious DeCosta (producers), attended the red carpet at Brooklyn Metrotech where the HBO Documentary Film premiered at the Tribeca Festival.

Director Mark Levin shared a warm embrace with his son and cinematographer Dan Levin on the red carpet for the I Promise premiere at Brooklyn Metrotech. They were joined by executive producer Jackson Devereux and The LeBron James Family Foundation to debut the feature documentary that tells the inspirational story of LeBron James’ journey to close the achievement gap in his hometown of Akron, OH.

Adrian Brody gave a heartfelt intro for the world premiere of feature film Clean acknowledging the Juneteenth holiday and the tumultuous year that has passed while also celebrating the tremendous work of the film’s cast and crew including director Paul Solet, producer Daniel Sollinger, RZA , Glenn Fleshler, Chandler Air-DuPont, Michelle Wilson, John Blanco, Jade Yorker, and Johnny “Boogotti” Hopkins. Clean is a hyper-violent meditation on the power of the past and the struggle for salvation when an unsuspecting garbage collector becomes the target for a local crime boss.

Director and screenwriter Deirdre Fishel was joined at the showing of Women in Blue by executive producer Gini Reticker, producer Beth Levinson, cinematographer Tom Bergman and editor Sunita Prasad. Following the film a panel including Deirdre, Sunita and Ganesha Martin, Chief of the Department of Justice Compliance and Accountability discussed police reform and efforts for improvement.

Co-directors Sami KAHN and Michael Gassert introduced The Last Out while thanking the cast, crew and families that joined them throughout their seven-year journey. Joining the co-directors, producer and cinematographer Jonathan Miller and editor Carla Gutierrez attended the screening. The group discussed the various twists the documentary took throughout the course of filming and shared the importance of the relationships that were made along the way.

Award-winning cinematographer Alejandro Mejia introduced his film 499 alongside Steve Holmgren and Sam Schild of the production team. The film examines life throughout modern-day Mexico by following the journey of a 16th-century conquistador who serves as the narrator.

Filmmaker, writer, and actor Joshua Leonard attended the screening of Fully Realized Humans alongside the producing team of Sean Drummond and Chelsea Bo and cast members Whitney Moorman and Bryan Ross. The film follows parents-to-be on the journey of self realization following a baby shower hosted by the couple.

Over at Astoria Park in Queens, the Tribeca mobile cinema screened Selma, Just Another Girl, and Daughters Of The Dust. Simultaneously, the mobile cinema at Walter Gladwin Park in the Bronx screened The Last Dragon, He Got Game, Shaft.