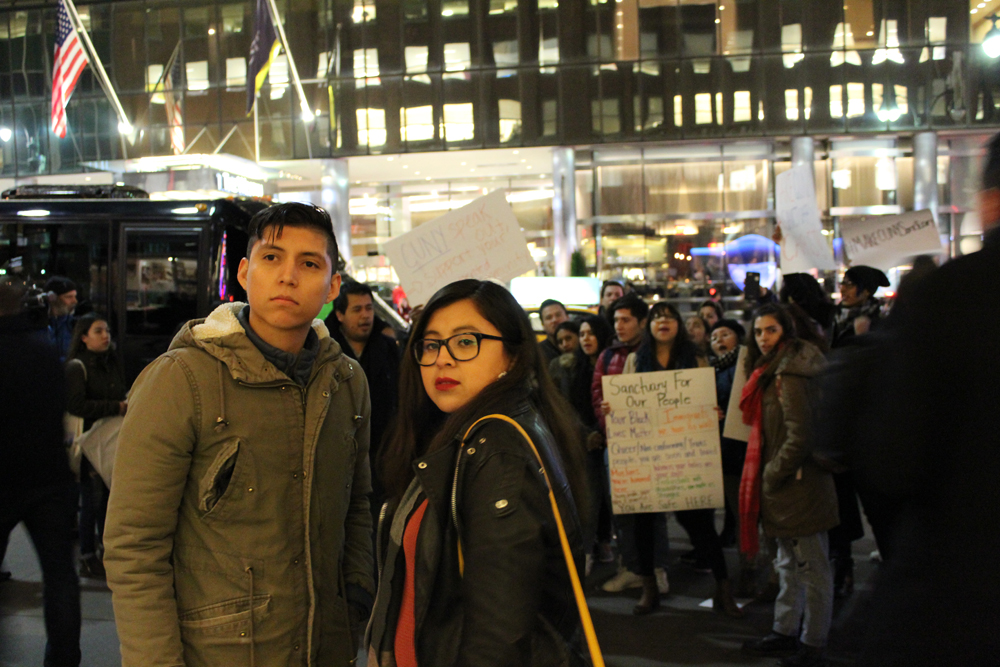 Students watch on as Isabel Mendoza leaves a Christmas present full of signed petitions in favor of a sanctuary campus at the lobby of the CUNY Center for Human Resources. Picture by Ricardo Montero-Hernandez.

Reporter Ricardo Montero-Hernandez was invited to a Roosevelt House forum where the concerns of undocumented students at CUNY were to be addressed. Some students, in turn, presented a petition to the office of the CUNY Chancellor, stating that he should step up to the plate and declare CUNY a sanctuary campus.

America’s undocumented communities are  anticipating a state of siege because of the 2016 presidential election.

Across the nation, men, women and youth are anxious that the new administration may be closing in on them, that America could be eager to push them out despite their contributions to the greater good of this country, contributions that should not be ignored. Undocumented communities, however, despite the reality of political perils, should not let their fears make them panic. They still have over a month to consider options as well assuage that fear.

In his 100-day plan published in October, President-elect Donald Trump vowed to reverse every one of President Obama’s executive actions. He promised mass deportations and the elimination of the Deferred Action for Childhood Arrivals known as DACA and on January 20, the undocumented community will finally find out if Trump is a man of his word. DACA grants temporary amnesty from deportation and the eligibility to work legally for undocumented individuals who arrived in America before they were 16 years old.

Applicants must not have criminal histories and they must be enrolled or have finished high school or have been honorably discharged from the military. Those are key requirements. If Trump gets rid of DACA, every undocumented individual would be eligible for deportation and will no longer be allowed to work legally. While he has said, postelection, that he only plans to deport those with criminal records, being undocumented and working illegally are technically already crimes, so it is unclear what his definition of criminal is.

The looming uncertainty of the days that might come has seeped into states, into cities, into neighborhoods and into the hallowed halls of City University of New York colleges. “This is a safe space for you to discuss concerns,” Cristobal Luis Aviles, Student Services Specialist from the Office of the Vice President for Student Affairs at Hunter, wrote in an email to this reporter, surely acknowledging the anxiety of undocumented individuals coming out in public. Aviles invited this reporter to a DACA forum November 30 at Hunter’s Roosevelt House “to be informed about what can be done now under our new presidential administration.”

Over 100 students attended the event. The stated mission of Roosevelt House, Public Policy Institute at Hunter College, is to educate students in public policy and human rights, to support faculty research and to foster creative dialogue. The panelists were Cesar Vargas, the first DACA recipient to be licensed to practice law in New York; Joseph Lavetsky, immigration attorney at CUNY Citizenship Now; and Dr. Martin Pino, a counselor at Hunter. DACA recipients, DACA hopefuls, documented immigrants and American-born students made up the audience. Students took notes. 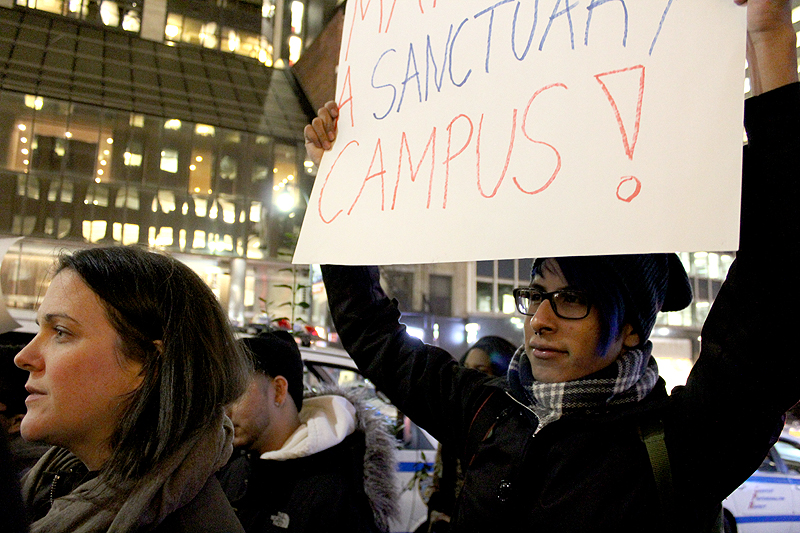 “Trump has said that he wants to end DACA,” Lavetsky told the audience of Latinos, Asians, Africans and Americans in the room. “It could happen and that would be unfortunate, but we don’t know, so you should try to renew your DACA if you are within six months of expiration.”Lavetsky also advised them not to flee the country after inauguration day and that there was a possibility that the federal government might use their DACA information to hunt them down. The greatest concern, as voiced by the students, was that their information could be shared with U.S. agencies, such as Immigration and Customs Enforcement agency known as ICE or the U.S. Citizenship and Immigration Services agency known as USCIS.

“Can Trump give an executive order to force New York to give away our information?” a student asked.

“Mayor De Blasio said that he will not share your info,” Lavetsky said, “but De Blasio can be forced to do it if there is a judge order or a warrant,” like the kind you give to criminals. “Just two years ago I got arrested in Iowa for stopping and trespassing, but am I a criminal under Trump? Maybe. It is subjective,” said Vargas, an undocumented individual himself. “We have to define the label of the good immigrant versus the bad immigrant because that in itself is dividing us.” Semantics matter in law, but ever since Trump was elected, definitions of what is right and wrong have been challenged and there is a struggle of power over established rules.

However, undocumented individuals still have a hand to play. The President-elect relies on the cooperation of cities and states to carry out mass deportations. While he will have full authority to change the Department of Homeland Security’s deportation priorities and single out what groups should be targeted for removal, he would still need the help of local governments to gather information and find people to deport. Some cities such as New York, Los Angeles, San Francisco and Chicago have pledged to be “sanctuary cities.” They have policies to protect from mass deportations. Some prohibit local police from asking people they arrest about their immigration status or refuse to obey immigration officers unless they have a warrant. It is not only up to governments to choose to become sanctuaries though, it is up to universities as well.

Colleges across this city, such as The New School and New York University, have pledged to become “sanctuary campuses” and have said they refuse to willingly help the federal government deport people. The “sanctuary campus” initiative has made it’s way to CUNY, and it’s what brought Isabel Mendoza and others to the front of the CUNY Central Office of Human Resources at 205 East 42nd Street on a cold December evening. “This protest is to ensure that CUNY is a sanctuary school,” Mendoza said. “[CUNY Chancellor] Milliken has not released an official statement pledging to be a sanctuary school yet, and we want him to sit down with actual students to discuss how exactly it is going to be a sanctuary school.”

CUNY has in fact, since the election, released three statements by Chancellor James Milliken stating that the University’s immigrant community will be protected, but he has not specifically said that CUNY was becoming a “sanctuary campus.”

“We will do everything legally possible to ensure their security and their place at the university. For CUNY, this is not just a pledge, it is a commitment demonstrated by our history as the clear leader among universities in this country in the support and services provided to immigrants,” said Milliken in one statement. “Forty percent of CUNY’s undergraduates are immigrants, which is one of the primary reasons this university is so full of energy and ambition, and is such a vital contributor to New York’s success.” 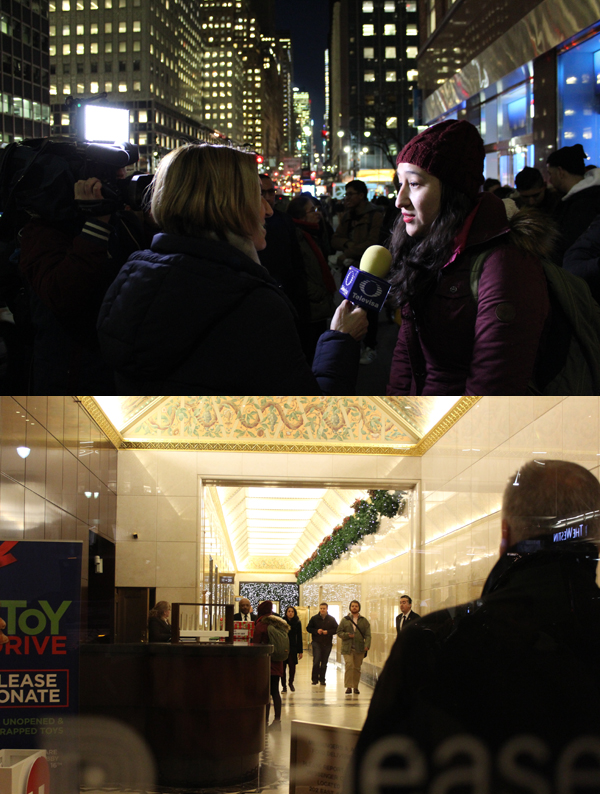 Isabel Mendoza, interviewed by Televisa reporter, leaves a Christmas present of signed petitions in favor of a sanctuary campus at the lobby of the CUNY Center for Human Resources. Picture by Ricardo Montero-Hernandez.

Mendoza was not satisfied with the Chancellor’s comments. A native from Tijuana, Mexico, Mendoza is a political science major at City College of New York and a Skadden, Arps Honors Program in Legal Studies scholar, and is undocumented. She and other students wrapped a gift of signed petitions from CUNY students to make CUNY a sanctuary campus and left it at the lobby of the office building for the Chancellor. Among the protesters was Francisco Aquino, a biology and political science major from Lehman College and a native of Puebla, Mexico. Aquino has been living undocumented in the country for 19 of his 21 years, and is worried that CUNY might give his information to the authorities.

“I don’t need to be worrying about my school giving away my information just to give the Trump administration numbers,” he said.

A crowd of 20 or 30 people joined together on the sidewalk in front of the building and chanted comments such as “undocumented and unafraid” and “education not deportation.” Police officers stood in front of them and instructed them to keep from blocking pedestrian traffic but had not put up barricades. The sight of students protesting reminded Angelo Cabrera, 42, of his time as an activist for undocumented immigrants. He went on a hunger strike in 2001 to support undocumented students in-state tuition in CUNY and SUNY schools. Originally from Puebla, Mexico, he came to the United States as a 15 year old. He has been undocumented for 25 years and now has a masters in public policy from Baruch College.

“Our biggest fear is the unknown for the future of deportation. The big fear is to get our information shared with USCIS. A lot of people could get deported,” he said. “New York maybe be a sanctuary but the college is still not.”

The uncertainty of the policies of Trump administration and the anxiety created by outrageous campaign promises and the demonization of entire groups of people holds the world’s attention, For undocumented individuals like Vargas, Mendoza, Aquino and Cabrera, the uncertainty and demonization threatens forced removal from their families, their education and the productive lives that they have led, thoughts that could surely put fear in anyone.

Yet, they stand together. Undocumented, yes, and unafraid.

the WORD collaborates in a partnership with New America Media.

← How Hunter Millennials Stay Informed About News – Part 5
If It Happened to Them, Could It Happen to You? →