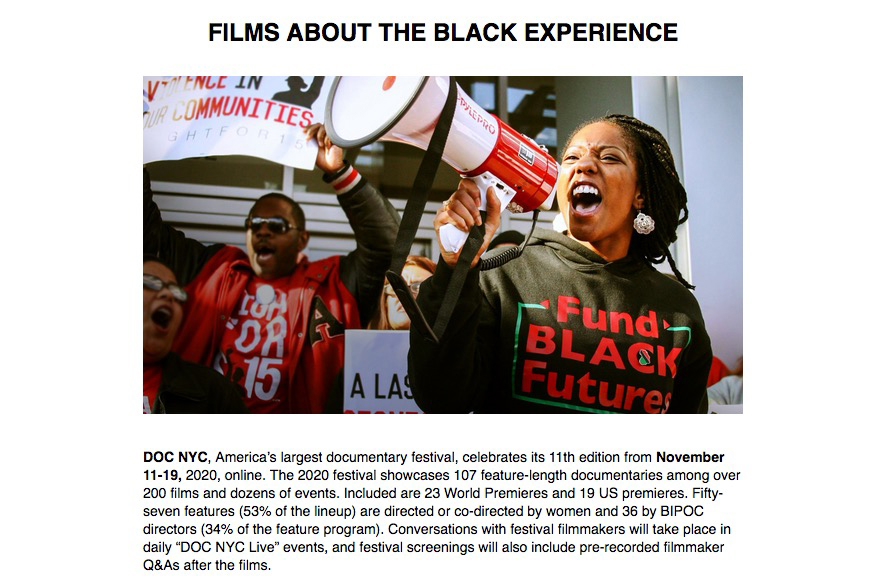 In 1978, Philadelphia’s police department conducted a violent siege on the communal home of the Black revolutionary group MOVE. Nine members of MOVE went to prison over the resultant death of a police officer, despite forensic mysteries in the case. Two of the prisoners were the parents of Mike Africa, Jr., who dedicated his life to fighting for their release. Filmmaker Tommy Oliver (Black Love) interweaves the past and the present in this vital examination of the legacy of aggressive policing and the fight for justice. (USA, 110 min.)

In the midst of the most devastating attack in American history on US soil, President George W. Bush finds himself in a South Florida classroom with a group of elementary school Youth. Nearly 20 years later, filmmaker Elizabeth St. Phillip follows these now-grown students and their journey into young adulthood. With their formative years framed by a devastating terrorist attack, the lives of these Youth provide an insightful look into race and class in America. (Canada, 88 min.)

North American Premiere. Filmmaker Justin Staple offers an eye-opening exploration of the SoundCloud rap phenomenon, a scene of troubled, young, lo-fi rappers that has emerged within the last few years. Exploiting the possibilities of social media to engage with a rabid fan base, a new breed of stars like Lil Peep, Smokepurpp, and Bhad Bhabie have disrupted the music industry, sidestepping traditional gatekeepers to shock the world with their rambunctious antics, prescription drug use, facial tattoos, and irreverent punk energy. (USA, 74 min.)

CAN YOU BRING IT: BILL T. JONES AND D-MAN IN THE WATERS (Metropolis Competition)
Dir: Rosalynde LeBlanc, Co-Dir: Tom Hurwitz

World Premiere. Beginning in 1980s New York City, this film chronicles the love story between dancers Bill T. Jones and Arnie Zane, the diverse dance company they founded, and the painful devastation of AIDS on the arts community, as told through the company’s signature performance piece D-Man in the Waters. Following a millennial dance troupe’s efforts to re-interpret the piece for their generation, directors Rosalynde LeBlanc and Tom Hurwitz offer an engrossing examination of dance, love, and loss—and the power of art to move through pain. (USA, 90 min.)

World Premiere. In the 1980s, Corey Pegues found himself embroiled in a life of crime as a member of New York’s City’s infamous Supreme Team gang. After an incident forces Pegues away from the streets, he unexpectedly emerges as a rising star in the NYPD, his past unknown to his fellow officers. A decorated 21-year police career is threatened when his political stances and revelations about his former life cause strife within the police community. (UK, USA, 84 min.)

A CRIME ON THE BAYOU (Investigations)
Dir: Nancy Buirski

World Premiere. Filmmaker Nancy Buirski (The Loving Story) tells the story of a lasting bond formed between an unjustly arrested Black man, Gary Duncan, and Richard Sobol, his young Jewish attorney. In 1966, 19-year-old Duncan faces the white supremacist court system in Plaquemines Parish, Louisiana, for daring to touch a white boy’s arm. Standing united, the pair takes Duncan’s case all the way to the US Supreme Court to fight for the rights of all Americans to a fair trial. (USA, 89 min.)

With blight ravaging New York City in the 1970s, the Young Lords and Black Panthers fought for radical change in their communities. Through the leadership of Dr. Mutulu Shakur—Tupac Shakur’s stepfather—these activists created the first acupuncture detoxification program in the United States. While the legacy of the program has long been maintained by the residents of the Bronx and Upper Manhattan, the individuals responsible for its creation have suffered from decades of state-sanctioned persecution. (Canada, 82 min.)

DOWN A DARK STAIRWELL (Fight the Power)
Dir: Ursula Liang

In 2014, Peter Liang, a Chinese-American police officer, shot and killed an innocent, unarmed black man named Akai Gurley in the dark stairwell of a Brooklyn housing project. In the midst of high racial tension surrounding police conduct, Liang becomes the first NYPD officer to receive a guilty verdict in such a case in over a decade. The highly publicized incident polarizes New York’s Asian and African American communities’ in this insightful look into the complexities of police reform. (USA, 83 min.)

World Premiere. After stints as a contributor to CNN and MTV, Sian-Pierre Regis makes his directing debut with this poignant story about his British immigrant mother, Rebecca Danigelis. At the age of 75, she’s fired from her lifelong job as a hotel housekeeper. She has scant savings after supporting two sons as a single mother. As his mother struggles to find a new job and faces ageism, Sian-Pierre cares for Rebecca by giving her a bucket-list adventure. Their story was covered in The New York Times article, “My Retirement Plan Is You,” and resonates for a whole generation of adults grappling with how to care for their parents. (USA, 71 min.)

North American Premiere. When a young London-born Nigerian music fan makes the shocking discovery that many Nigerian musical icons don’t possess copies of their own recordings, he returns to Lagos to re-record them. This film chronicles the music—from juju to Afrobeat and everything in between—and its parallels to Nigeria’s socio-political evolution from the colonial 1950s through the nationalist movement and independence in the ’60s. Rare archival footage colors this performance-rich tour through the history of the nation’s music. (Nigeria, USA, 98 min.)

The Harlem Youth’s Zone Initiative has transformed the lives of several generations of Youth and led a revolutionary educational and social experiment to break the cycle of poverty and violence. This inspiring and timely film uses an extraordinary archive to document its history. From serving one block in the 1990s to ultimately reaching 97 blocks, the program demonstrates real change through the stories of students, educators, and the visionaries who are still helping Youth succeed. (USA, 107 min.)

In an increasingly common scheme to steal their land, land-owning Kenyan elders are being accused of witchcraft by younger family members and sent away. Responding to a bizarre Facebook message that his beloved grandmother is killing Youth, Karisa visits his family compound in rural Kenya to investigate. This unhurriedly paced, visually engaging story explores complex family dynamics and the intergenerational misunderstanding that can occur when traditional values and the demands of the modern world collide. (Kenya, 81 min.)

SINCE I BEEN DOWN (Fight the Power)
Dir: Gilda Sheppard

Kimonti Carter is serving life without parole in a Washington state prison based on a harsh 1990s three-strikes law, but rather than accept this condemnation, he has worked to transform inmates’ lives through education. His experience brilliantly elucidates the dehumanization and trauma that accompany incarceration, but also demonstrates the possibility of redemption even among those society has called irredeemable. Gilda Sheppard’s profound and revealing film represents a 12-year journey to investigate the circumstances and inequities that have landed a whole generation of African-American youth in prison. (USA, 105 min.)

Night-shift workers and single moms in New Rochelle, NY have angels in their midst: Nunu and husband Patrick run a 24-hour childcare center for parents with no other options. The home-based center provides Youth with food, fun, and lots of love, but at what cost to the providers? Director Loira Limbal takes us inside Dee’s Tots Daycare for an intimate and compelling look at two unsung heroes in selfless service to their community. (USA, 72 min.)

*No full reviews, only capsules/mentions

An intimate, inspiring, and timely portrait of Congresswoman Barbara Lee, a true pioneer of American civil rights who was the lone voice in opposition to the authorization of military force after the September 11th attacks. A unique selection of political commentators, activists, politicians, and family members add depth to the story of the highest-ranking Black woman in the US Congress. Uncompromising and conscientious to the core, she is its most steadfast voice for peace, and for economic and racial justice. (USA, 82 min.)

In Newark, NJ, a Black Muslime casket maker takes two troubled teenage boys under his tutelage. Teacher and students alike learn the meaning of tradition, hard work, and forgiveness through instruction in the ways of traditional Muslim burial. Shot in stark black and white, this beautiful look at a unique craft shows the importance of a bond forged through mentorship. (USA, 82 min.)

Fed up with misdeeds committed by Chicago law enforcement and a political system unwilling to hold anyone accountable, two millennial Black women take action. Spoken-word artist Bella and PhD candidate Janaé work tirelessly rallying the community and challenging a power structure that historically turns a deaf ear to young, Black, female voices. Over the course of a year, filmmaker Ashley O’Shay documents these courageous activists in their quest for political liberation and social justice. (USA, 86 min.)

Key festivals: BlackStar, Frameline, Inside Out

North American Premiere. Anointed as Miles Davis’ protegé by the legend himself, Wallace Roney slipped into relative obscurity shortly after his mentor’s death. A recently rediscovered orchestral jazz suite written by Wayne Shorter for Davis but never performed draws the gifted Roney back to his horn. As Roney struggles to organize an orchestra to perform the challenging piece, can he bring honor to his mentor’s legacy? Director Sam Osborn gifts us with this moving testimony on what it’s like to be in love with and uncompromising in your art. (USA, 78 min.)

NYC Premiere. After the Minneapolis Police department appoints its first female chief, three female officers, each from different walks of life, must cope with the interdepartmental politics of this landmark change. When Chief Janee Harteau is forced to step down, the film explores the tenuous proposition of achieving gender equality within an ethically questionable institution. (USA, 105 min.)