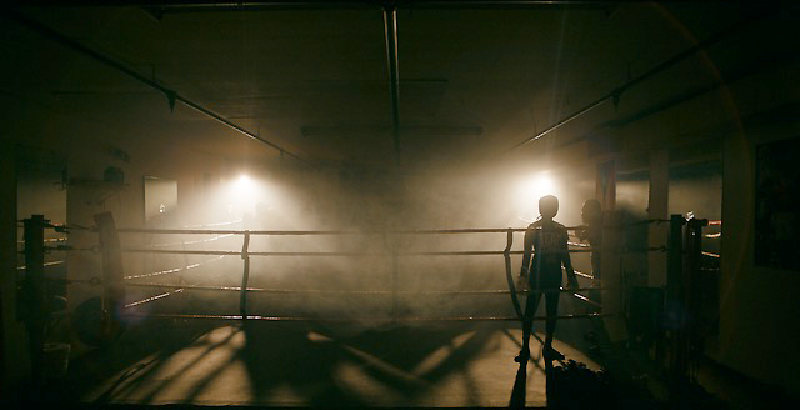 GLOVES OFF is a visual and sonic feast of an eloquently told story, with a bitter sweet edge, about Tiara Brown, a Washington D.C. police officer who is also a gifted amateur boxer training to become a world class champion.

The sharp stuccato smack-smack-smack of Brown pummeling punching bags and scenes of her brandishing uppercuts, jabs and hooks as if she’s savaging opponents infuses kinetic energy in this profile of a fiercely determined black woman who works and sacrifices to be the best at whatever she wants to do, whatever hat – cop or power-punching pugilist – she may be wearing at the time, in whatever ring she steps into. 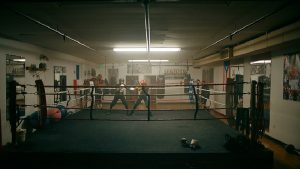 Interspersed vignettes of her interacting with black men and women in the street as veteran, street-wise Officer Brown supplement the kinetic energy of GLOVES OFF that Directors Ugonna Okpalaoka and Nadine Natour so masterly infused in their film. So too their scenes of Brown interacting with family, friends, gym patrons & habitués and her trainer.

Yet, as much as Okpalaoka and Natour feed us of their sumptuous visual and sonic feast in 20 minutes playtime, and as much as we load up on the delights from scene to scene, there comes a time when we become aware that there is so much more to Brown.

Of course could just be that the film short is so damn good that we want more, more, more. That we have to be satisfied – and should be – that we can see what we see. 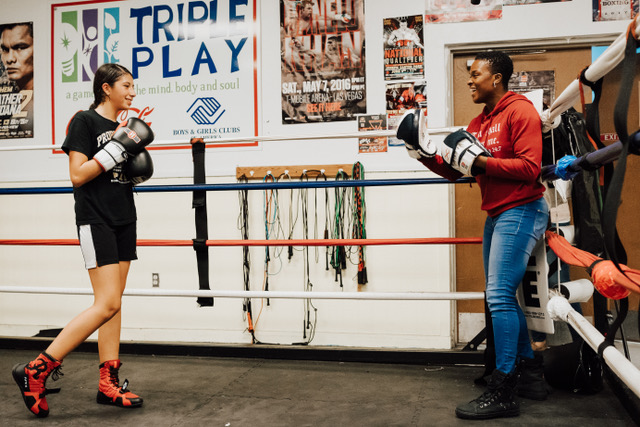 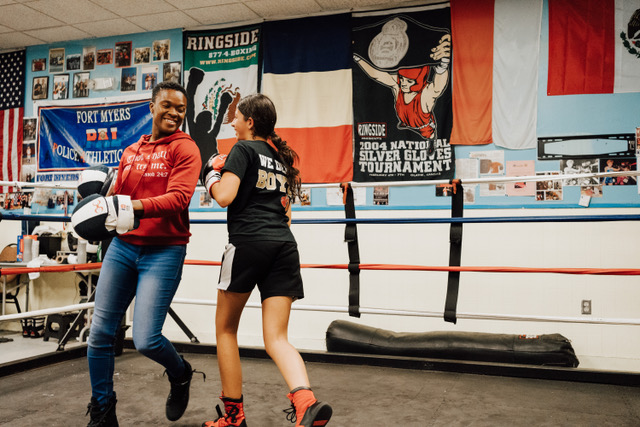 Boxing is her passion, she says nonplussed in a telling statement, “and being a police officer makes me feel more human. I don’t think I can have one without the other.” The sport that is her passion and the job she needs “to feel more human” are excruciatingly demanding for individuals who are only involved in just one of them. Brown handles both with aplomb.  How long can this dichotomy function harmoniously without taking a toll? My guess is that she will rise to the challenges that come before her. Regardless, that reality just adds to Brown’s mystique.

There are telling scenes of her speaking figuratively and literally, always eloquently, that will cause savvy audience members – whether they see GLOVES OFF on a big screen or the one at home – reflect on the Black Diaspora. This reviewer wouldn’t be surprised that GLOVES OFF may be a work-in-progress for a full fledged feature film, documentary or otherwise.

GLOVES OFF has gritty great lines eloquently expressed, lines that we would be lucky to hear in the occasional cop or boxer TV show or movie that has merit. Below is one of my favorites from GLOVES OFF. It’s in the early minute of the opening scenes and Brown is recalling candidly but not bitterly her experience as an established elite member of Team USA Boxing. There is also some reflection about the realities of Living While Black in these here United States.

“I would always bring back gold medals. Yet, when it came time to being interviewed or being on the front of the magazine, it would always be be the pretty long, tall blonde who would get chosen. The black girls weren’t being treated the same way the other girls were being treated. After going through that for years, I quit the team.”

“When I left Team USA, it was probably the hardest decision I’ve ever made in my life because I was leaving a lot of things behind, but I couldn’t deal with being treated less than I should have been treated. I was just trying to figure out what am I going to do with me. That’s when I entered the police academy. A lot of my family asked me questions. Most of them have always hated the police, but they all love boxing.” – Tiara Brown.