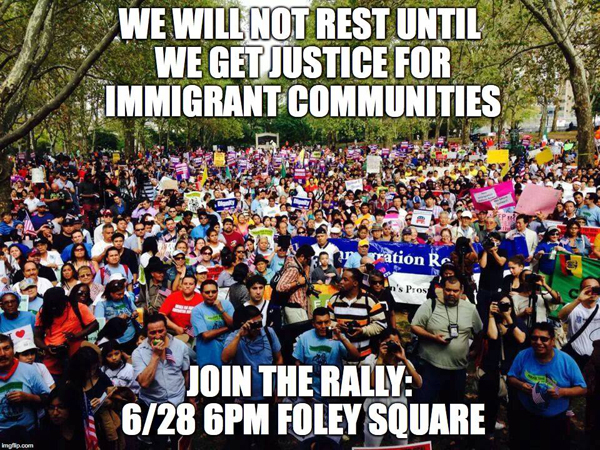 WHAT: New York Immigration Coalition and its members, immigrants and allies will gather at Foley Square on Tuesday, June 28th at 6pm to rally for immigrant New Yorkers in the wake of the Supreme Court’s failure to allow immigration relief programs to move forward.

Although President Obama’s immigration relief executive action programs, Deferred Action for Parents of Americans and Lawful Permanent Residents (DAPA), and expanded Deferred Action for Childhood Arrivals (DACA+) would have provided over 250,000 New Yorkers (and 5 million across the country) the ability to work and live without the fear of deportation, it remains a small part of what our communities need: comprehensive immigration reform. It is imperative that New York’s immigrant communities and their allies continue to advocate for comprehensive immigration reform by upholding pressure on our congressional leaders.

The rally will take place on the evening of New York’s Federal Primary Election, and advocates will send a loud message to our representatives that we demand that they get behind immigrant families, fight to keep families together, and push for immigration reform on the federal level.

WHY: Last Thursday in disappointing decision, the Supreme Court announced a 4-4 ruling in US v Texas, the case determining whether President Obama’s 2014 immigration relief programs can go into effect. A tied decision from the Supreme Court means that the 5th Circuit Court of Appeals’ decision is upheld, and the Deferred Action for Parents of Americans and Lawful Permanent Residents (DAPA) and the expansion of Deferred Action for Childhood Arrivals (DACA+) programs will not be implemented.