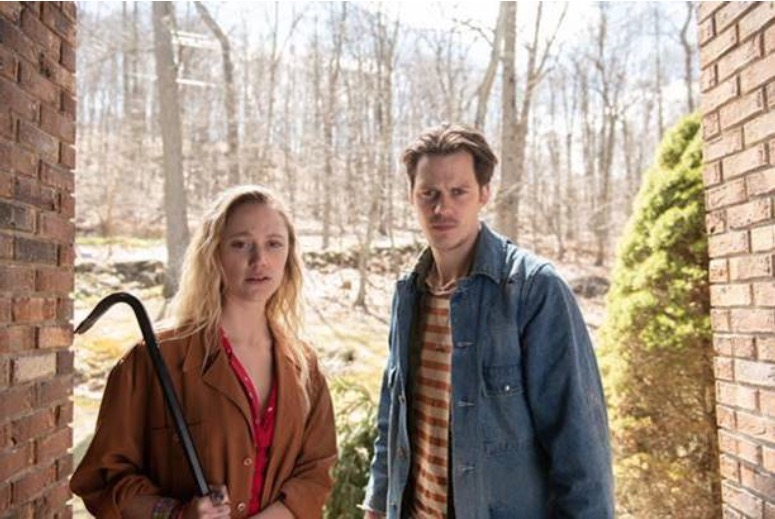 Potential audiences should know that this article was inspired by a publicity-marketing snippet and that the review was done with absolutely no regrets, with the reviewer keeping in mind that on board were veteran actors Bill Skarsgård, Maika Monroe, Jeffrey Donovan & Kyra Sedgwick: ALTER says it’s A Gunpowder & Sky Company whose films explore the human condition through warped perspectives. Wow!

An augury firing up my imagination that, maybe, with this “warped perspectives,” I should anticipate a thematically take-all-risks production rooted in horror or surrealism or the otherworldly, the unworldly, the ungodly – or maybe all commingled in a new sub-genre?

I was opened to – am opened to – warped perspectives! Bring it on. Bring on the oomph, Directors Dan Berk & Robert Olsen.

I was primed and ready.

Or so I thought …

For the dream mission, however, first, they must pull off a heist in broad daylight, sticking up a service station for $$$ to make the trip and realize the dreams. The location is somewhere in the South, I’m guessing Georgia, because of the soft-twang in their accents. There be slapstick humor here. Early in that slapstick wacky heist scene – just a little detail here, not enough to be a spoiler – one perp is wearing the costumed head of a bird and the other perp, a costumed horse’s head.

Oliver Stone’s 1994 NATURAL BORN KILLERS featuring Woody Harrelson as Mickey and Juliette Lewis as Mallory, as in Mickey&Mallory pops into my mind. [Droll, dark humor, sagacious and savage, in yer’ face.] And that triggers, understandably, reminisces of the seminal Bonnie&Clyde with Faye Dunaway as Bonnie and Warren Beatty as Clyde in Director Arthur Penn’s BONNIE AND CLYDE (1967). Slick, black, comedic, action-adventure with social and historical social overtones.

A déjà vu alert? VILLAINS and NATURAL BORN KILLERS and BONNIE AND CLYDE parallels cannot be denied – so I think.

Anyway, Jules&Mickey’s get-away-car runs out of gas not far from the scene of their crime, so they break into a nearby house looking for a new set of wheels, subsequently meeting up with George (Jeffrey Donovan) and Gloria (Kyra Sedgwick), the couple who owned the home. No Bonnie&Clyde resonance here, nope. George&Gloria, however, could easily fill the roles of  The Man played by Everett McGill and The Woman played by Wendy Robie in Director Wes Craven’s THE PEOPLE UNDER THE STAIRS (1991). George&Gloria also have two kids. [Regarding the kids, keep in mind warped perspectives]. Jules&Mickey are cut-throat dangerous but are they a match for George&Gloria (who could have written the bible on How to Be Cut Throat Without Really Trying).

Cutting to the chase. It’s hard to imagine any film aficionado passing up an 89-minute movie with Bill Skarsgård, Maika Monroe, Jeffrey Donovan & Kyra Sedgwick starring, no matter what perspective. But I want to see VILLAINS again at its big screen national roll out  September 20, 2019, to decide if it is good, really good or over my head because of the warped perspective.