Ya’ gotta’ luv those rare films that early on, after you settled relaxed into your seat, try to seize control of your mind, body and soul whether you like it or not. I can’t get enough of their creative abracadabra! – Gregg W. Morris

An IMPOSSIBLE MONSTERS film blurb available on the Internet is misleading for my taste: Dr. Rich Freeman (Tony Award winner Santino Fontana), an ambitious and well-liked psychology professor, pursues a sleep study with a focus on nightmares, dreams, and sleep paralysis — the success of which could result in a lucrative grant. As the line between dreams and reality blur, a member of the study is murdered, and everything begins to unravel, leaving Rich fighting to make things right.

I imagine the creative talent assigned to blurb for IMPOSSIBLE MONSTERS had nightmares with their assigned task. There are times pre-publicity and publicity blurbs fumble their missions – that’s my opinion. They are suppose to entice, seduce, arouse, draw us to the theater without giving too much of the story away.

So, I accepted an offer to review this psychological thriller featuring a psychology professor who forms a focus group (all members students except one) to help him get a lucrative grant for a study of nightmares, dreams, and sleep paralysis so that he can significantly improve his career and academic stature in the eyes of his college administration.  [Shades of the realpolitiks of the Academe are subtly rendered but vicious nonetheless.]

Wham! – I’m blindsided minutes after the start of the film. 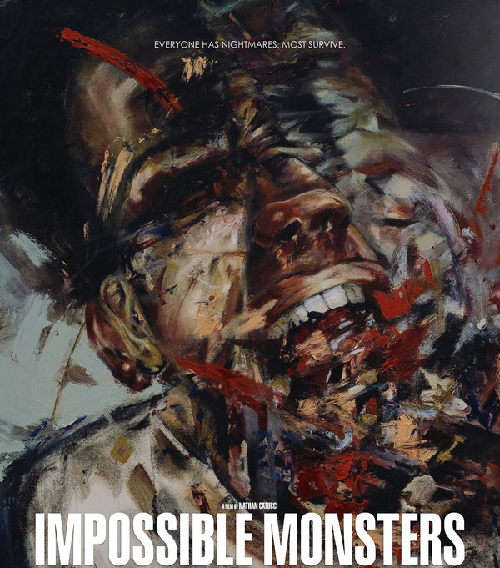 The storytelling is beyond belief, as if the storytellers had commingled conspiratorially with the spirits of M.C. Escher, Salvador Dali and Jung to make a movie beyond the pale, drawing on the sinister and manipulative realpolitiks of Academe as backdrop, as background, and subtly but smartly executed.

I was jimmy-jammed by a torrent of images. Blitzkriegs of startling, nightmarish imagery of dreams, daydreams, nightmares and daymares experienced by the characters – as well as hallucinations and illusions – inundated my conscious, sub-conscious and unconscious as well – coming at me like rapid-firing time warps shifting repeatedly with flashbacks and flashforwards.

From one scene to the next, a relentlessly sinister film score pulsing with symphonic fervor fueled almost neverending apprehension throughout IMPOSSIBLE MONSTERS. It kept me on high alert that something ghastly was about to happen in the scene before me or the scene to follow or the scene after that. It’s just a matter of time (I thought and felt) before something awesome is going to happen. Until, almost like an epiphany, I figure out what the filmmakers were up to, the derring-do they were pulling off.

Alas, l won’t provide that spoiler here – and it’s not out of the goodness of my heart. I want audiences to endure what I had to endure.

But I can provide a few non-spoiling teasers. Like this one, of course: Life in Academe for student and professors, but especially students, can be a hell on earth. Or this one: IMPOSSIBLE MONSTERS has the soul of a well lensed and crafted film noir sans the usual supernatural and unworldly artifacts, but on steroids, nevertheless. Spooky and scary without the spooks, goons and, thank the gods, zombies.

One of the features of Roman Polaski’s ROSEMARY’S BABY (1968) that wowed me was this: it would have been terrifying without the satanic and supernatural plot elements. I couldn’t get over the Big Apple urban paranoia, alienation, isolation and betrayal – matrimonial and otherwise – so much a part of his film. Another, this one suburban paranoia, alienation and betrayal, et. al.: Les Craven’s A NIGHTMARE ON ELM STREET (1984). Freddy, the bastard child of the 100 fathers who raped his mom in an insane asylum, could have been just as terrifying as a relentless fantasy, nightmare or daymare sans Freddy’s satanic pact with Lucifer.

Ripped from the Headlines?

The setting is New York City but a significant film location is the City College of New York campus of the City University of New York. Belying the pristine scenes of NYC Academe portrayed in IMPOSSIBLE NIGHTMARES is a real world system under nightmarish stress. How much did the filmmakers draw on the realities for their impossible monsters? Investigation Into City College President’s Finances: What We Know – New York Times. The true crime in higher education: how we’ve abandoned public universities like CUNY – New York Daily News Opinion Piece. Thousands of CUNY students experience homelessness and food insecurity, report says – New York Daily News. CUNY Feels the Heat of Gov Cuomo’s Animosity – Politico.

At this point I stop. Probably revealed too much already.