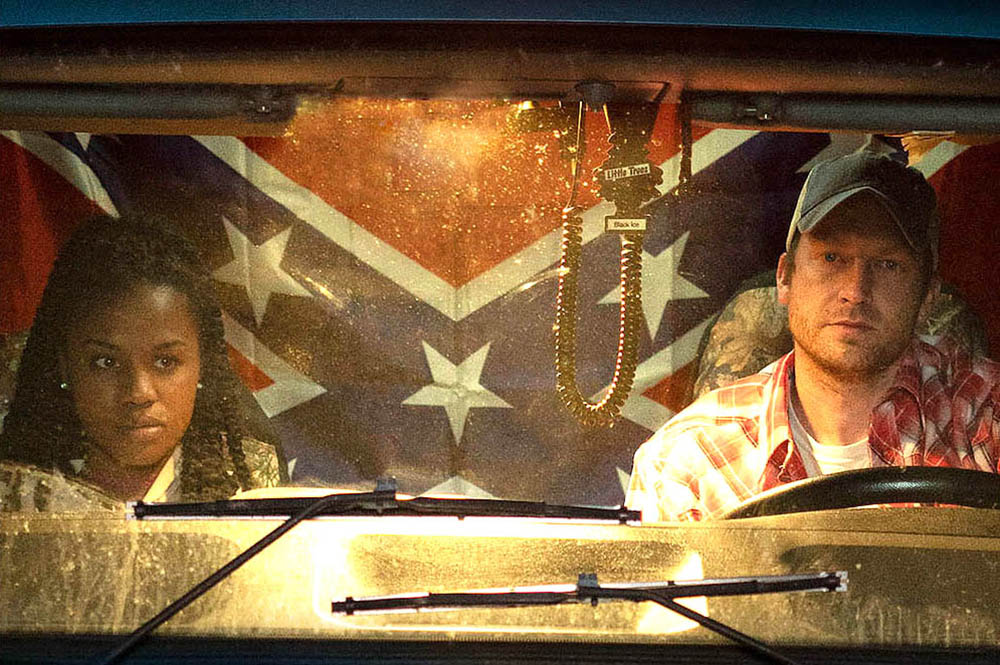 The protagonists of this film short are Livy, a young woman Black and proud, who, hitch hiking on a cold late night, catches a ride with Gus, a long-haul trucker, White, and a true believer in the spirit of the Confederacy reflected in the Confederate flag displayed prominently in the rear of his cab. Sparks fly moments after Livy climbs into the cab and spots the relic that most if not all Black Americans revile as racist. That flag can also trigger a knee jerk reaction: Best be on guard because you are in hostile territory.

Livy and Gus are going at it when a state trooper pulls Gus’ rig over. Adding to the burgeoning suspense is the felony warrant out for Livy’s arrest for stealing a bag of chips from a service station. The plot’s escalating suspense can push many audiences to the edge of their seats, waiting with bated breath to see what happens next.

No Spoilers Here But …

Audiences have to watch QUEEN OF THE DESERT to know what happens next. Nevertheless, Director Mary Ann Rotond, who won Best Woman Directed Short at the Poppy Jasper International Film Festival this year, uses her characters, with their ethical and socio-political differences, gender and ethnicity too, to support her belief that the power of shared humanity can meliorate the centrifugal forces she believes are tearing away at America. [Shared humanity?]

The Who, What, Where, When, Why and How of QUEEN OF THE DESERT

I liked this short film because it captured my imagination it addresses race relations in America – and that was well done in a very short amount of time.

In light of the troubled history of the mistreatment of Blacks in America and how race relations could improve if people were more open minded and more respectful of each other, QUEEN OF THE DESERT has riveting moments. I wondered if maybe it shouldn’t have been longer. Nevertheless, the suspenseful story of antagonistic protagonists getting pulled over by highway cops and sharing a bag of chips makes for great drama, all on their way to a salubrious telling, is a delight. I still feel like a little more could have been elaborated in that time span.

The camera work was really good, capturing every angle, emotional as well as visual. I love that the camera work near the end of the movie, captured a flower that enamored Gus. Of course, you have to see the movie to understand why the flower scene stood out for this reviewer!

Abigail Jean can be reached at ABIGAIL.JEAN31@myhunter.cuny.edu