After graduating high school in 2008, I did one year of college before withdrawing to seek adventure. I bartended, worked as a deckhand on tug boats, travelled through Costa Rica, Western Europe and across the United States. I took writing classes at UCLA, and managed a property in Ireland. I did all this with the hopes of earning a living as a writer.

When it became clear that I had to do more, I returned to college with a plan to resume my career path after I graduated. My matriculation at Hunter started in 2014. And I keep on writing, nevertheless. Living through this 2016 presidential campaign has been a truly suspenseful experience. I did live through Bill Clinton’s impeachment, George Bush Jr.’s hijacking of the 2000 presidency, the start of the 2008 financial crash, and the election of America’s first Black president and his subsequent warfare with a Republican dominated Congress on the record to disrupt as much as it could of his Presidency. All grist for writing projects.

Because of all the Sturm and Dang of 2016, it’s obvious that Americans want and need surcease.

Millions, however, believe they experience surcease if the political leadership remains the same and that explains the support for Bernie Sanders and the fascination with Donald Trump, so far. Trump’s brazen, sometimes even profane, outspokenness and his shock-and-awe style have bedazzled many into believing that with him as president, they and their families and neighbors and friends might recover from the calamitous times that they have endured as well as any that may be impending. Trump’s supporters want to believe America can be “great again.”

Meanwhile, Sanders calls for a revolution against the “1 percent” who capitalize on all America’s resources, while the “99 percent” suffer from the consequences of the former’s greed. Hilary Clinton, too, represents something new. She would be the first woman president of the United States. This would be groundbreaking, but it doesn’t have the same cutting edge appeal that Sanders and Trump seem to offer. Instead, Hilary Clinton represents for many the same system that has disappointed Americans for the past 20 years or so.

I can’t help but feel pessimism for the whole campaign. If Trump was to be elected, that would just mean America will have to suffer consequences not even being discussed yet, and the country will be set back another four years, if not more. I just don’t see Sanders winning it. He lacks the political support and apparatus that he will need to deal with Congress. As for Clinton, I believe she’d just keep the country on the same course it’s been on.

Contrasted with the frenzied excitement Obama’s election campaign caused almost eight years ago, viable outcomes of this election campaigning seem futile. Are other students on this campus as pessimistic as I am? Hunter’s undergraduate student body consists of 16,550 students primarily located at the main campus at 68th and Lexington Avenue, according to 2015 Hunter stats. U.S. News and World Reports in its annual “America’s Best Colleges” ranks Hunter eighth in its top public universities. For this column I have interviewed four students for the record but I know and associate with a lot more from attending classes.

I can accept skepticism that my modest number of interviews for this article may be regarded insufficient to assess Hunter students’ perception about the campaigning, that I am self-appointing myself as a pundit who wants to pontificate for the sake of pontificating. But I believe that I, with the interviews, plus my experienes as a full-time student on this very diverse urban campus and in constant contact with other students can provide insight.

Mike Saterson, 24, a full-time prospective math major and a math tutor who lives in Prospect Heights, Brooklyn, said he liked Hilary Clinton but he was actually “a little more sold on Bernie.” Sure, he admitted that Sanders might “harp on the money stuff” and may even seem like a “one issue-candidate,” but Saterson considered these issues “really important.”

Saterson, who had shoulder length hair, glasses, and a couple weeks’ length of facial hair, also said that Clinton and Sanders were “neck and neck” on issues of racial inequality. However, Sanders’ stance against economic inequality really earned Saterson’s support. Clinton was “too tied to Wall Street,” he said.

Saterson said that the Republican candidates were “just in disarray” and that “volatile, extremist rhetoric” that comes from candidates Rubio, Cruz, or Trump, can be found “a novel of a dystopian future,” and that watching a Republican debate is “like watching a satire.” Meanwhile, everybody in Saterson’s circle, he said, support Bernie Sanders. “Some people are on the fence,” he said, “but Bernie supporters are zealous.”

Bernie Sanders is an “avowed socialist, and one of the most liberal members of the U.S. Senate. Most news media ignore the reality that his socialism hasn’t turned off Vermont voters. Sanders was born in Brooklyn. He was elected as an independent to Vermont’s single House seat, then went on to the U.S. Senate. He has had a colorful career as a mayor, a carpenter, a writer, and a college professor at Harvard and Hamilton College. If elected, Sanders would be the first avowed socialist to be elected president as well as the first Jewish president.

Sanders, according to a New York Times story, not too dissimilar from other news stories, is asking voters to join him “in what he has framed as a political revolution.” It is this stance that appeals to young people like Saterson.

William Chan, 22, of Stony Brooke, Long Island, is a double major in Latin and classical studies. He chose Latin because he has “been learning Latin for the past 10 years” and he wants to be a Latin teacher, he said. Chan said that of Trump, Sanders, and Clinton, he identified “mostly with Sanders” because, Sanders’ position has “remained unchanged throughout his entire career.” While the other candidates changed their views “it seems like [Sanders] is not playing the politician game.” Unlike Saterson, Chan, who wore glasses, a hooded sweatshirt, said that he did not pay attention to other people’s political opinions. “I try not to talk politics” he said.

Most of the time when the topic of politics comes up among the people I hang out with, the conversation focuses on Trump’s alleged stupidity. I can hear, there’s no way he’ll win, or, I can’t believe people will vote for him. Then there’s the murmuring of sobering truth, yeah, but we’re in New York, and the reality has stunned everybody silent.

Amara Thomas, 20, from Jamaica Queens, said that Sanders should be the next President of the Unites States. Wearing all black, with hoop earrings, her hair up in a bun, and bangs down to her eyebrows, Thomas, who worked at an H&M, said that “Bernie seems like the best equipped candidate.” However, Thomas also said that presidential campaigns are extremely expensive and questioned how Sanders can get campaign financing while speaking out against 1 percent and Wall Street with such vehemence. “He keeps saying he’s a radical socialist, but is he really?” Thomas said.

Thomas’ question reminded me of an article in Business Insider headlined, “Bill Clinton Slams Bernie Sanders.” The article took its material from comments Bill Clinton made during the New Hampshire primary. Clinton implied that Sanders was hypocritical for using Hilary Clinton’s association with Goldman Sachs as ammunition in debates, while Sanders, too, makes deals with “big-wig Democratic donors,” which Bill Clinton cited from a CNN news story.

Like Thomas’ remark, it made me consider that Bernie Sanders was saying one thing to his voters, while making deals with investors just like all the other politicians.

Marchella Alonzeau, 20, from the Lower East Side of Manhattan, agreed with Thomas about Sanders. “Where does [Sanders] get all his money?” she asked, wearing long braids, glasses, and a pink sweater. Alonzeau, who worked in Department of Africana and Puerto Rican/Latino Studies in Hunter, said that, although she was not registered to vote, she loved to study politics – just not American politics. Her interests lay mostly in international politics, and on issues such as “distribution of wealth and how progressive countries work.” Yet, she said Sanders’reproaching Wall Street, for example, made her feel that he should be the next president of the United States.

Sanders, as I was writing this article, was behind Clinton in the primaries as well as in votes from delegates for the Democratic nomination. The possibility of Sanders winning the Democratic nomination looks pretty slim at this point, though Sanders has stated he’ll stay in the race until the very end. Trump, however, is constantly portrayed as preternatural juggernaut that cannot be stopped and will almost certainly get the Republican nomination – even though GOP leaders don’t even want him.

Like Alonzeau, I took my time in registering to vote. I was 18 when Obama was running against John McCain, and I was far too caught up with conspiracy theories to vote, such as the existence of the Illuminati and fate of the world being decided by the Bilderberg Group. When Obama ran against Romney, I was immersed in Ireland, not paying attention. So, this year will be my first time taking part in the great democratic tradition of electing a president even though I am uncertain about the candidates and what they can do to make America live up to its ideals. 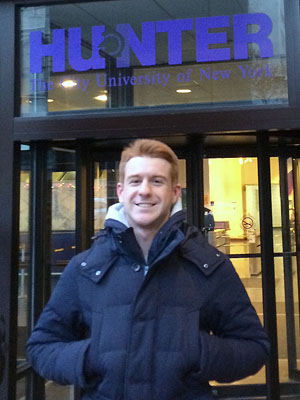