After a brutal winter with temperatures as low as 1 degree on some days, students interviewed for this article expressed mixed feelings about the spring, mixed feelings about a possible strike by the union representing CUNY faculty and no mixed feelings but anxiety about possible Paris-style terrorists attacks. [Editor’s Note: New York City list of terror incidents in the Big Apple.] 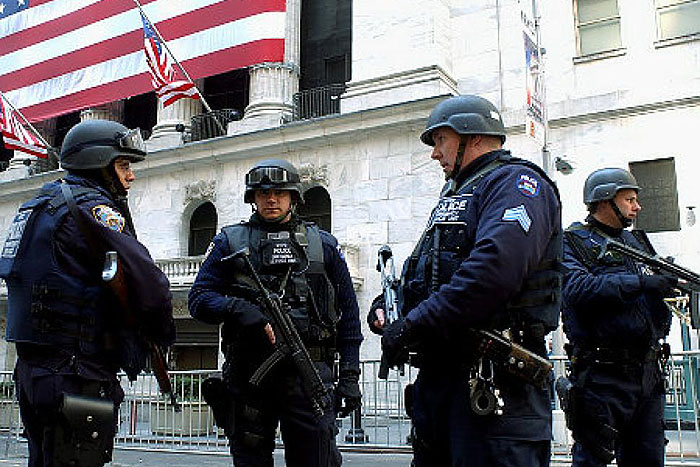 The weather inspired optimism when it reached 73 degrees March 31, according to Kevin Beltran, 22, a psychology major interviewed for this article. “It feels good to wear less layers,” he said. “Commuting when it’s cold sucks.”

Beltran, wearing a button down light blue shirt and jeans, was excited that his commute from Westchester could be a bit easier without him having to carry jackets to accommodate the weather. Student Danielle Dimmler, 20, a psych major and music minor, had her doubts, however. “The weather keeps changing so I can’t be excited,” she said as she put on her jean jacket. “It’s very annoying. I like the fall. I like the cold. When the weather gets too hot I’ll stay in my A.C. apartment.”

There were bigger issues on their minds. Because of terrorist attacks in Paris, terror awareness and alerts have increased. Many New Yorkers said they see more police officers at subway stations. Dilmer and Beltran said they weren’t especially nervous about attacks. Beltran said that he “can’t live life in fear. I feel like we’re safe. I take awareness. If something happens, it happens.”

Dilmer said that after the terror attacks she’s “more aware.” They advised students“ be aware, be self-aware and beware of your surroundings.”

Dilmer and Beltran said they were both aware of the possibility of the strike by the Professional Staff Congress, the union representing about 25,000 faculty and staff at CUNY, but said they lacked specifics about the failed negotiations. They have seen many flyers around school and knew that the PSC, at the time of these interviews in mid spring, was seeking authorization from its members to strike for a better contract if the CUNY administration did not reach agreement with them.

After being informed Dilmer said, while fixing her glasses in the digital booth cafe in the third-floor area near the campus library, “I don’t get why they just don’t get paid more. It affects everyone not just the teachers. They’re going to lack motivation.” Beltran said that “they should get a raise. Teachers have to go through a lot of school. A raise would make them more motivated to teach.”

New York, PSC Press Release — After more than six years without a raise and five years without a contract for its members, the union of faculty and professional staff at The City University of New York announced that 92% of the union’s voting members have voted to authorize a strike to achieve a fair contract. The resounding ‘yes’ vote was the result of a strike authorization vote held May 2-11, with ballots counted today by the American Arbitration Association. Professional Staff Congress (PSC) President Barbara Bowen said the union remains committed to resolving the contract through negotiations and will not take any job action during the current academic year, but could take action in the fall if left with no alternative.

“A 92 percent vote to authorize a strike demonstrates that the CUNY faculty and staff are willing to fight for the working conditions we deserve and the learning conditions our students deserve. The union’s goal is to reach a fair contract without needing to strike, but the CUNY administration must put a decent economic offer on the table. CUNY’s substandard pay and conditions are endangering the University’s core mission of teaching, learning and research,” said Bowen. “The union hopes to build on the growing public and legislative support for funding our contract, and we will do our utmost to reach an agreement through negotiations, without a strike. But after six years without a raise, many of us are struggling to keep up with the cost of living for ourselves and alarmed at the threat to academic quality at CUNY. The vote shows that PSC members are ready to take a stand for what we need and what we believe in,” she added.

The vote is not a vote to strike; it is a vote to authorize the union’s Executive Council to call a strike or other job action if a fair contract cannot be achieved any other way. The authorization vote is the latest escalation in a five-year effort by the union to negotiate an acceptable contract with the CUNY Administration. More than 10,000 PSC members participated in the vote. The total yes vote represents an absolute majority of eligible voters. It is the first strike authorization vote the PSC has taken since 1973.

CUNY provides a high-quality education to over 500,000 students, the overwhelming majority of whom are people of color from poor communities. But its 25,000 professors and staff have seen the value of their pay plummet against NYC’s rising cost of living. The University is struggling to retain faculty and hobbled in its recruitment efforts by uncompetitive salaries.

Professor Kevin Foster, chair of the Department of Economics and Business at City College of New York, said uncompetitive pay and scarce resources are undermining his department’s efforts to provide the excellent education CUNY students deserve.

“In my department, of the 11 untenured faculty hired in the last ten years, seven left before a tenure vote, driven off by low pay, poor working conditions, crumbling buildings, heavy teaching loads, and lack of support for research,” said Foster.

A strike authorization vote is unusual for a public-sector union in New York, but it is legal. While state law imposes financial and legal penalties on public-sector unions and employees who participate in strikes or other job actions, the vote itself is within the law. PSC members voted 92% in favor of strike authorization understanding how high the stakes are for their students and themselves.

“During this past six years with no raise, I’ve earned tenure, published a co-edited book, and taught a couple thousand CUNY students, many of whom face struggles academically and in their lives. Yet for nearly two years now I have needed a roommate in my Queens studio apartment to help cover my rent. I’m not a starving artist! I am a tenured professional with a full-time job, who lives in one of the most expensive cities in the U.S. I should be putting all my energy toward my students, who are working to overcome challenges far greater than the ones I face, but stagnant pay and rising costs don’t allow me to do that. I’m voting ‘yes’ for the strike authorization for me, for my colleagues and for my students. CUNY faculty need salaries that support the critical work we do,” said Professor Deborah Gambs, Sociology Department, Borough of Manhattan Community College.

Emily Chiriboga can be reached at mily.chiriboga38@myhunter.cuny.edu

← Super Bowl Sunday? Ho Hum Says This WORD Writer
The Heat is on As the Semester Ends →