Can you imagine the time when you couldn’t access news through your smart phone, iPad or computer? There was a time when news was transported by carrier pigeon, hand-carried messages and the Pony Express. Finding out who won the latest chariot race in Rome could be found in the Acta Diurna, a daily gazette that Julius Caesar started. During the Han Dynasty in Ancient China, if you were one of the lucky bureaucrats with access, you could learn of official announcements and news through government-produced news sheets called tipao.

Today we are hit with unlimited information, e through social media outlets, online media and news apps that can be downloaded on to smart phones. It’s all about the quickest and easiest way to find news. Television news broadcasts experiencing a decreasing percentage of viewers and the same can be said of newspapers regarding their readers. 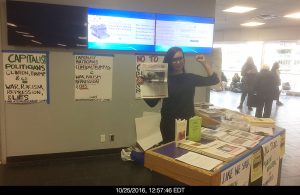 Social media no longer are just used for communicating and showboating but also as another platform for news. Three students this writer interviewed said that they used social media, such as BuzzFeed, Facebook, Instagram, and Twitter to stay on top of news. “I primarily get my news off of Twitter and Instagram,” Andrew Henry said. “I do spend most of my time on social media outlets. I have my own theory, which is, If it’s worth knowing then I’ll hear about it.”

“I know that if its breaking news I will find out about it on social media. I also occasionally watch ABC 7 to catch up on news but I primarily use social media,” he also said.

Regarding these news media sources, Lesia Forde said, “They are super accessible as oppose to me having to go and purchase a physical copy of a newspaper or sit before my television at a specific time to watch the news. I am also able to see the instant reaction (through conversation, comments) of the public.”

The interviewees also gave various answers on what topics they considered to be important. “Anything from international to local. To me it’s important either for safety reasons, economic reasons and viewers can also help out in cases,” said Carla Mota. “I read it mostly because international news affects most countries including home, Santo Domingo. The Dominican Republic is usually falling behind any crises that is born in the USA or affected by the USA. Not to mention that Dominican Republic owes loads of money to the USA.”

Said Henry, “I typically consider tuning into entertainment news more than others. I love reading about celebrities and what they’re doing. It might now be the news that I should be mostly interested in but it’s my personal favorite type of news. I also always check news for the weather.”

Forde said, “I am usually gravitated towards anything that is going on in the entertainment world or hard news. These topics are important to me because my career path fits into the entertainment realm, and I like hard news and international news, because it keeps me aware of what is happening in my immediate and outside environment, which I believe is very important.”

While most people consider entertainment news regarding celebrities, new movies, new music and the latest infidelity to be news, some think that there should be less of it or shouldn’t be part of it at all. “I think Americans need to have more access and interest in international news,” said Samantha Fowler. “Often times, foreigners know about the U.S. but we can be a little too self-involved to look at what they are doing. I don’t think anything is overrated because in today’s world you can simply choose what to read. I like to know how Kendall is handling Blac Chyna’s relationship with her brother but I will also read about the lack of medical funding in Syria in the NY Times.” 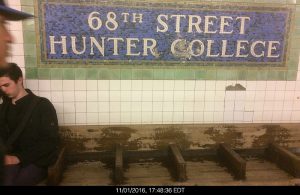 Said Avid Maldonado, “Celebrity news is given way too much attention. Personally, I could care less about New York Fashion Week. Let’s focus on what is going in New York City instead.”

This writer believes that is one problem with using social media for news. Since social media are used by numerous celebrities, the public will see what they want the celebrities want them to see even if it’s not important. There have been many times when I’ve been informed that Taylor Swift is breaking it off with boyfriend number 12 was trending while other important national and international issues were getting short shrift.

Henry summed up best for this writer what the interviewees essentially said, “I must say I do feel like the news covers Hillary Clinton and Donald Trump a lot more than any other candidates in the past. I feel like we live in a world where its entertaining to watch them debate than to actually hear what their plans are for this country. As far as the way they are portrayed in the news being biased, I feel like it depends on what channel and outlet you are tuned into. Different outlets will report the same story differently, so, therefore it depends on which outlet you get your information from because that will or will not determine who you’re influenced by.”

And Maldonado said what I would like to imagine (but no better) that everyone in the United States should be thinking. “I think anyone who is a minority should not be voting for Trump due to all his racial comments. But then again I don’t think anyone should be voting for him,” he said.

← Views on the Election and the Current State of America
Essay: Helping New York City Immigrant Communities to Resist the Smog of Fear Caused by President-elect Donald Trump →