In Joanna Vasquez Arong’s reflective essay, myths are woven to try to understand how a small town copes with the devastation and trauma in the aftermath of a typhoon. A girl’s voice divulges bits and pieces of her own memory, of her grandmother and mother, to tie in the experiences she felt visiting this ravaged town – Old Fool Films. 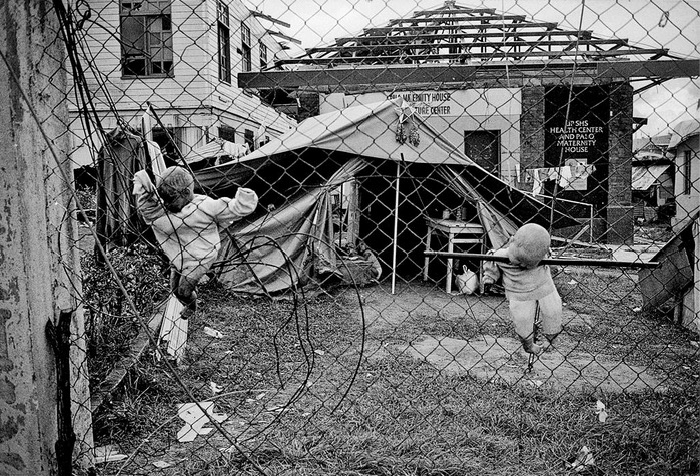 TO CALM THE PIG INSIDE opens with gleefully playing kids – dressed, half-dressed, and naked – sliding and body surfing on the surface of a few inches of shallow water that has pooled on a flat concrete surface. Heaps and heaps of what were once buildings, structures, large poles and thick black wires now reduced to grisly ignominious rubble surround the makeshift kids’ playground. Desolation is as far as the eye can see and beyond.

The gruesome and the horrific are rendered beautifully in an exquisitely photographed scene slowly panned and in sharp relief to the sounds and views of a bunch of kids, survivors of an apocalypse that they can’t possibly understand, having fun as the voice of an unidentified young girl begins to narrate. More impeccable scenes are too follow. This reviewer couldn’t help but recall famous iconic footage and stills of a nuked Hiroshima after it was bombed by the United States August 6, 1945 and Dresden, Germany, after it was savagely bombed February 13 – 15, 1945, by British-American bombers. Savage desolation by Mother Nature, savage desolation by man – is one worse than the other?

“I grew up looking forward to the monsoon seasons one of my favorite memories are those running in the rain with my cousins,” says the young girl, nonchalantly, the irony undeniable, as she narrates this mind-blowing documentary short –  done as if in the aesthetics of an auteur rather than that of a filmmaker delineating facts of a historic event!  TO CALM THE PIG INSIDE is 18-plus-minutes of exquisite black and white imagery of the gruesome and the horrific rendered beautifully in a narrative using folklore about the ungodly desolation that shook the Philippines to its roots. 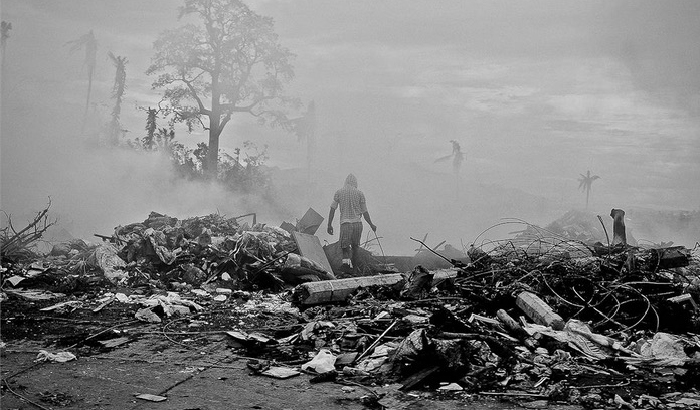 Unlike the storm footage seen on the weather channels where there is no folklore about ghosts moving about the desolation nor the mythical to address the essence of the carnage, Joanna Vasquez Arong’s imagery is transcendent: It brilliantly uses the arcane, the mysterious and the magic of folklore.

“People told me about Buwa, the pig inside the earth. When angry, they say the earth trembles. People then shout ‘Buwa! Buwa’ during an earthquake to calm the pig inside,” Filmmaker Joanna Vasquez Arong was quoted as saying in an article published in the English-language Philippines newspaper SunStar and headlined, “Cebuana filmmaker wins at Slamdance Film Festival.” Arong won the Documentary Short Grand Jury Prize and was also was quoted as telling the audience, “But I never heard any stories on how to calm the winds of the typhoon nor how to prevent a storm surge.”

The “pig” was not quelled that November of 2013. Yolanda Super Typhoon Haiyan displaced 4.1 million people, killed more than 6,000. One-thousand-eighteen-hundred were reported missing and presumed dead, according to Wikipedia and other sources. And there were unofficial but non-deniable reports that thousands more had perished. Yolanda ADA Super Typhoon Haiyan ravaged 1.1 million houses, destroyed 33 million coconut trees – a major source of livelihoods – and catastrophically disrupted the lives of 5.9 million workers. Overall damage was estimated at $5.8 billion. 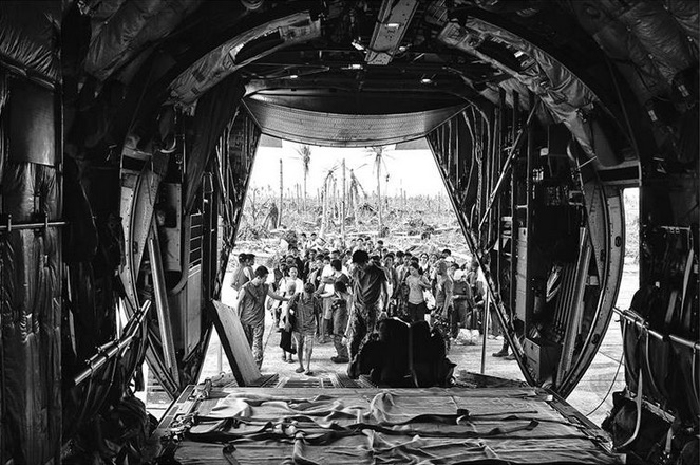