Time magazine, the Hollywood Reporter, Entertainment Weekly and numerous others gave rave reviews to THE LAST SAMURAI starring Tom Cruise and Ken Watanabe and directed by Edward Zwick. The film, reportedly inspired by the 1877 Satsuma Rebellion – and the western imperialism of Japan, was nominated for four Academy Awards and three Golden Globe Awards. And it had a great film score by Hans Zimmer!

Based on a real event in the late 1880s, a competition that that persists today, SAMURAI MARATHON, starring Takeru Satoh, Nana Komatsu and Mirai Moriyama, and directed by Bernard Rose, should rock the cinematic richter scales when it is released. It was the opening night film for the 2019 NYAFF.

Rose’s simple film title doesn’t tip off audiences to the ferocious glut of decapitations, treachery and outrageous conniving and cheating that occurs in this race to the finish, which can also be described as a race to get sliced, diced and gutted for many unlucky characters. Audiences will be awed by Rose’s cinematic violence just as audiences were in awe of the slow-motion savaging in Sam Peckinpah’s 1969 WILD BUNCH – except in SAMURAI MARATHON, the verisimilitude is flawless and it’s swords and blades not shotguns, rifles and machine guns.

And no slo mo. 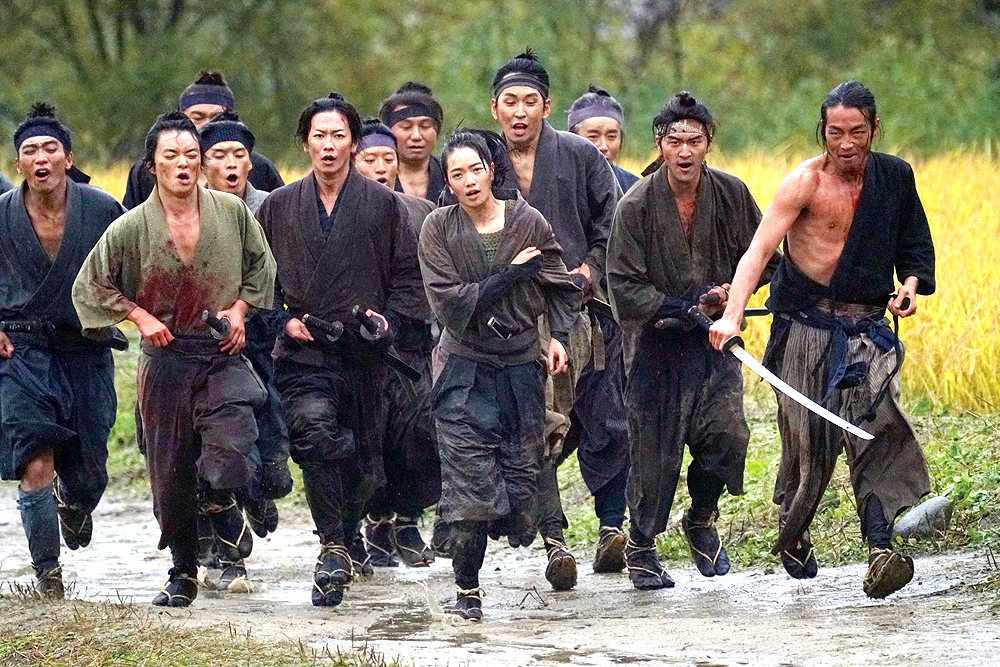 Nor does the tile even hint at the depth, scope and plot complexities of this gorgeous cinematic adventure story augmented by a Philip Glass film score (that score punctuated with gut wrenching sounds of swords doing major harm to the bodies of adversaries).

Just a little background: American imperialism shows up in 1855 with the initial wave of foreign imperialism in the form of Western traders bearing bourbon, daguerreotype photographs and photography (do-your-own-pics) and .45 caliber “peace making” revolvers. Despite the the seductive offers, the leader of the Annaka clan, recognizing the threat, uses the opportunity to test his warriors by announcing a marathon so that he can evaluate their readiness for war. Everyone under 50 must compete and the clan leader will grant the winner a wish.

His test, however, triggers unfortunate events. As samurai are summoned for the race, speculation builds that the Annaka clan itself is getting ready for war. Jinnai Karasawa (Takeru Satoh), the clan leader’s accountant whose has had a covert loyalty to shogun in another province because of a family tradition , sends an urgent coded message to the fortress there: “Send medicine.” After the Annaka marathon is announced, however, Jinnai, realizes he has erred, that he has ignited the fuse to start a war based on a bad misinterpretation of the reason for the marathon. And he races throughout much of the film to try to stop what he has ignited.

Meanwhile, Yuki (Nana Komatsu), the princess of the Annaka clan, who has rejected the spouse chosen by her father, plans to compete in the marathon surreptitiously by dressing as a boy, while her potential husband, a high ranking samurai, has decided he will cheat to win.

The film runs 103 minutes and every turn of the punishing marathon route reveals treachery and conniving and plotting. There will be moments among the gasping at the violence that audiences will have no choice but to laugh.