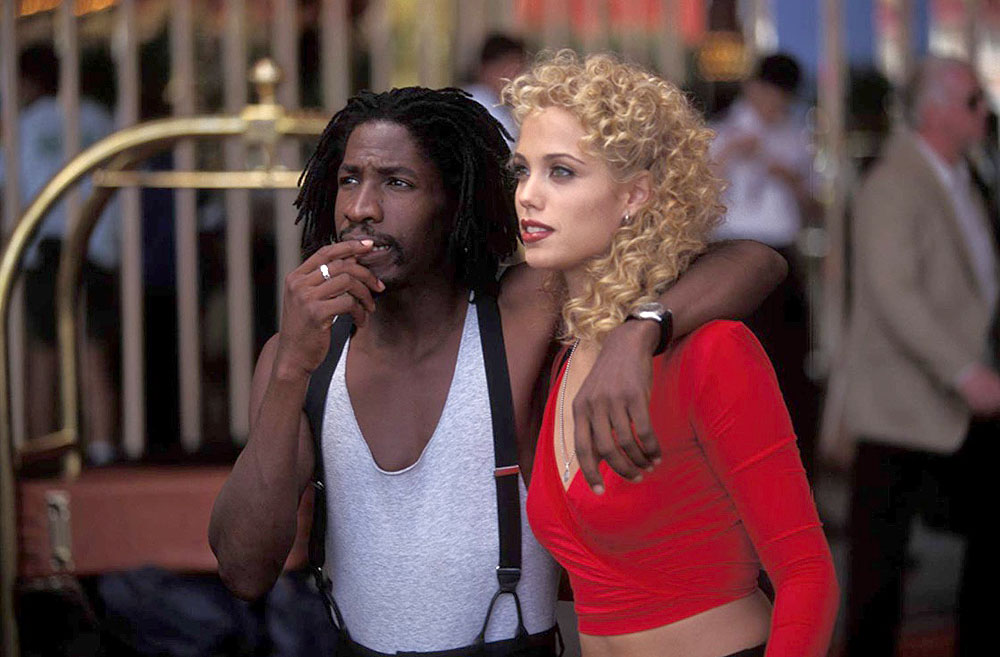 Attention Jeffrey McHale: YOU DON’T NOMI is a smartly done, five stars plus debut for your first feature documentary, so you Hang 10 for the waves of approbation and disapprobation coming your way for your derring-do to step into the cinematic maelstrom of SHOWGIRLS.

A Tribeca Film Festival blurb by TFF staffer Jason Gutierrez sparked my interest to review your sagaciously crafted documentary, resulting in an ephiphanous reminder for this reviewer about the constellation of forces that influence, if not determine, what is supposed to be considered the good, the bad and the ugly in filmdom.

YOU DON’T NOMI also triggered a kindred spirit for SHOWGIRLS. My personal note about this connection is at the end of the review.

When it was released in 1995, Paul Verhoeven’s Showgirls was reviled. The first NC-17 release to receive a wide theatrical release, the public and critics of the era—with a loud, clear, collective voice—rejected the film. It was nominated for a record 13 Razzie Awards, and won a then-record seven. Roger Ebert, in one of the more generous reviews the film received, summed his opinion up by noting that, “the film is not, in short, quite unredeemably bad.”

But Showgirls’ reputation has been resuscitated in the intervening 24 years, and conceding one’s admiration for Nomi Malone’s sordid tale is no longer the admission of questionable taste it once signified. You Don’t Nomi brilliantly draws on archival footage of Showgirls’ production, revealing interviews with the major players, and surprisingly thoughtful conversations with the cinephiles who are leading the charge in the film’s redemptive journey from a notorious flop to cult classic. Is it a masterpiece? Or is it a piece of shit? McHale’s addictive documentary argues for a third designation: The masterpiece of shit.

The film definitely rocks core regions of filmdom know-it-alls. I won’t be upset if I never know what you, McHale, thought about Gutierrez’s “masterpience of shit” quip but in my imagination you thought the quip was shit. After screening YOU DON’T NOMI, I felt an ephemeral but visceral twitch to watch SHOWGIRLS for the first time via Tubi. I now want to see YOU DON’T NOMI again, which, as of this date, hasn’t been picked up for distribution. A pity. I eventually will see SHOWGIRLS again.

Nevertheless, if there is a cult following evolving, beam me up Scotty.

Myriad Internet sites trumpet their lists of the most disturbing, the most disgusting and the most controversial films “ever made.” One prominent example of an “ever made” is IMDB’s, AKA Internet Movie Data Base’s, “Most Disturbing, Controversial, Shocking, Bizarre, and Messed Up Films.” I’m adding Esquire magazine’s “The Sleaziest Movies Ever Made” because it was the only “most sleaziest” to show up in my Google search as well as because it was strangely contradictive, that is, giving it a positive nod even though still considering it sleazy.

Talking head interviews can weigh a documentary down if executed well, but they were precision buoys for your film.  For me, screen writer Joe Eszterhas’ snarls about what happened way back when worked well. Interviewing Adam Nayman, who authored, “It Doesn’t Suck: Showgirls,”  was wise – not that you don’t know that but I had to state it. No need, obviously, to explain why here.

No snarls from Paul Verhoeven. I believe his sisu shielded his ego from whatever vulgar, viscious, vile, vituperative shots aimed at him professionally and personally. However, he subsequently was involved in several mediocrity productions, like HOLLOW MAN (2000).

Elizabeth Berkley fared much worse.. Her director certainly did do much to protect her. There was no interview of her taking a carving knife to him. Verhoeven’s goulash of parody, satire, burlesque, cartoonery and buffonery was blood in the water for the reigning demons of race, gender, class and homophobic biases at the time. I don’t know why but I had visions of a Verhoeven in an alternative universe splashing away at a canvas like a Jackson Pollock.

I wished Glenn Plummer, who played James Smith, the caricature of the nonthreatening empathetic-black-guy, the only African American in the movie, had been interviewed. I can’t help but wonder if that scene with Smith and Nomi, groin to groin, crotch to crotch, grinding kinetically on that chair, was the incendiary blasphemy of a reigning filmdom taboo at the time. Similar in dynamics, though not in substance buy maybe a little in style, to those contemporary blasphemies that inspired lynch mobs, pogroms, bloodletting, annihilations and/or attempts there of, throughout American history

I don’t believe the heart of the volcanic repugnance against SHOWGIRLS was rooted in its moviemaking. I recall reading about the heat that Raquel Welch took – as well as special attention from the FBI – for her romantic interlude with Jim Brown in 100 RIFLES.

Mchale, I sure in hell am not blaming you for not interviewing Plummer, nor of what I consider your adroit selection of interviews regardless of the decisions about whom to interview and those who didn’t want to be interviewed.  YOU DON’T NOMI opens that door that can let other filmmakers with  bravado and instincts to step into this breech.

I never gave much thought if any to seeing SHOWGIRLS when it opened way back when. I don’t recall the venom and vituperative hullabaloo of scorn and vilification. That black hole in my memory mostly like results from my taste in films back then: Really good sci-fi, horror, action, action adventure, mostly general release films – violence. Mann, Gilliam, Romero, Fincher, Stone, Scorsese, Raimi, Corman, Bigelow, Franklin, Craven, Boyle, Petersen, Rodriguez, Lee, Carpenter, Friedkin, the Scotts brothers, Kubrick – I could get pumped for word any of their movies being released.

I’m guessing that I might have regarded SHOWGIRLS as a skin flick. Whatever. About that time, I was working on projects about the injustices in the juvenile and criminal justice systems inflicted on kids: Kids who killed their parents, kids who kill, kids on death row. And I was studying the Diagnostic and Statistical Manual of Mental Disorders, fifth edition AKA DSM V, and additional medical texts to hold my own interviewing psychiatrists and psychologists and the kids who were the subject of my projects.

Which brings me to this kindred spirit for YOU DON’T NOMI. I recall the Twilight Zone experiences for my book, “Unspeakable Acts: The Ordeal of Thomas-Waters Rimmer,” William Morrow & Co., 1993. It was selected by the New York Times for its Notable Books of the Year, 1993. Before that, however, it had gone through a T-Zone meat grinder of inexplicable voraciousness. Mixed reviews? Not a problem. But factual errors and inaccurate information in Publishers Weekly and Kirkus Reviews made me want to scream.

One critic said too much time was wasted trying to find the cause of death of the mother of the central character in the book. That was one of the main reasons for the book. A flawed autopsy report listed cause of death as natural causes. The Harvard psychiatrist who did the first book review for the Times pounced on Unspeakable Acts because she didn’t like that way I went about doing my interviews. A book reviewer for the Plain Dealer in Cleveland, Ohio, didn’t like my interviewing approach either but at least wrote that the book was an important read about evils of male child sexual abuse. Hint: The main protagonist, I discovered belatedly, was suffering from PTSD and had been unwisely advised by his lawyer and his psychologist to participate in a book publishing project.

The publicist, a freelancer, hired by William Morrow & Co. told me that she wasn’t doing any publicity for the book because of the negative Plain Dealer review and that she would only reconsider if I got a Times review – and she said she believed that wouldn’t happen. She wanted to spend her valuable time promoting Howard Raines’ “Fly Fishing Through the Midlife Crisis.”

She would later tell an executive producer of the Phil Donohue Show that I wasn’t available to be booked for the show. As I was walking out of the studio of a Cleveland CBS network affiliate that contacted me and not the publicist, the producer of the show pulled me aside and told me that the publicist was trying to sabotage promotion of the book.

The William Morrow publicist was a monster but the editors and copyeditors who worked on it were very supportive. Except one who tried to keep the book from being published because it made her recall her younger years when she was sexually abused by a family member.  Will wonders ever cease? Me, I worry about unceasing nightmares.

There were other reviews, positive, but in small publications that didn’t get much attention.

Kindred spirit. I list here some informative information about film reviews and film reviewers and their ecosystems. Diversity in this area of filmdom is still problematic but back in 1995 and in subsequent years, pathetic.